The costumes disguising The Masked Dancers

12 celebrities, 12 crazy costumes – can you guess who’s who by their smooth moves in The Masked Dancer UK? 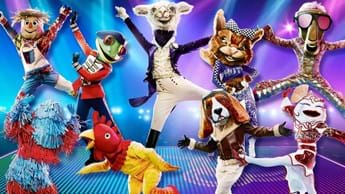 If you’ve loved The Masked Singer’s combination of seriously silly costumes, sheer talent and that head-scratching mystery of trying to work out which famous face is behind the mask, you might be ready to step up to the big leagues with The Masked Dancer.

This season, the 12 celebs include a former boyband star, a judge from a major dance competition series, a former Olympic figure skating champion, an Olympic gymnast, a ski jumper, one of the world’s most famous burlesque stars, and a member of one of the UK’s most high-profile street dance groups. They’ve been snuck into the Masked Dancer studio under Oscar-level security, and have kept their presence on the show a secret even from their closest family members. And while the judges and audience will have a cryptic clue package to help guide them to the answer, these light-footed celebs will be doing their best to trip us up, whether they’re doing breakdance, ballet, swing or salsa.

Haven’t tuned in yet? You can still watch it on Catch Up!

With costumes ranging from the silly like “Carwash”, “Zip” or “Rubber Chicken”, to the animalistic like “Flamingo”, “Squirrel” and “Llama”, there’s always something fun to see onscreen. But the performers’ requirements were a little different than they would be on The Masked Singer. Like a certain cartoon lemur we all know and love, they had to move it-move it.

Those arms and legs must be free to do their thing, and the head can’t be too heavy to do a flip. As a result, the costumes were a collaboration between Plunge Creations (who are also responsible for the Masked Singer UK costumes, too), who made the masks, and costume designer and fabricator Nicola Atkinson (Strictly Come Dancing and So You Think You Can Dance), whose team made the body of the costumes.

Character designer Tim Simpson, managing director of Plunge Creations, reveals, “The inspiration can come from almost anywhere. For Carwash, I was inspired by the Kukeri costumes of Bulgaria. They are huge hairy costumes traditionally made of long furs, sometimes from yak and musk ox. I wanted to find another way of creating a massive furry costume and Carwash was the result. Knickerbocker Glory? Well, I was eating an ice cream…”

“The most complicated aspect of the whole process is not knowing who you’re making a costume for. We get sent measurements, but it still feels like we’re working in the dark a bit and it’s sometimes not until we’re on set with the performer that we finally get to properly fit the costume. We’re getting more used to it but it’s still tricky,” says Tim. “If the character has eyes (and not all of them do) then my favourite part of the making process is adding the eyes. It is when the mask finds its true character. In this series of The Masked Dancer, we had one hell of a time with Squirrel – she still looks pretty bonkers, but there was a stage when we fitted her first eyeballs when she looked completely unhinged.”

You can see close-up details of the costumes along with the manufacture process on the Plunge official website here.

BBC Brit (DStv channel 120) is available on DStv Premium, Compact Plus, and Compact. To get DStv, click here.