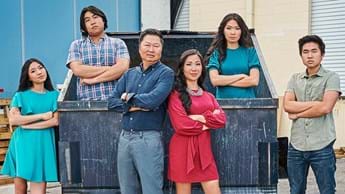 The Trans are one of four families spotlighted in TLC’s (DStv channel 135) brand-new series, So Freakin Cheap. These are families who’ve turned bargain hunting into an extreme sport, and will pinch a penny ’til it shrieks.

The Trans run their own business and live in a beautiful neighbourhood, but they’re not above poking through the bins on trash day, stocking their office from a dumpster, searching through rubbish for perfectly good items to donate to a homeless shelter, or even making beauty pageant outfits from someone else’s scrap.

Trans on a mission

You call yourselves Crazy Cheap Asians. Is there a certain TV family you relate to?

Elizabeth Tran: Fresh Off the Boat is a very accurate depiction of our family as Asian Americans adjusting in Orlando, of all places. (We do) Some of the things that they do, like when you see free samples you go there three times to get as many as you need because they don't have a limit, or buy things in bulk, or always choose the ones on sale versus the one that's not on sale. That was the first time we really even saw an Asian-American family represented in a way that related to us, not just the cheapness side of it. It's cool that we can do the same on a reality show.

How did you come to be on the show?

Elizabeth Tran: I made my last evening gown for Miss Florida, USA 2020, out of garbage with the goal of promoting sustainability. I love making gowns. If I were to get it custom made, it would have been so expensive, and given that my family and I love putting together trash creations anyway, it was the perfect opportunity. I think TLC thought, “Wow, this is a very cheap pageant girl and pageant family. Let's learn more about them.” That's how we ended up on the show.

Did you have people trying to stop you from going through dumpsters, especially with TLCs cameras there?

Rosanna Tran: When we do dumpster diving, like you see on the show, we first make sure there isn’t a ‘no trespassing’ sign. And we go to an industrial or office area, so the garbage is more clean. It's just paperwork, furniture, and stuff like that. It depends on what we are looking for. The last time, we were looking for office furniture for Elizabeth's home office.

Elizabeth Tran: Yeah, a good place is one that has a lot of excess items that they decide to throw away, even though there is a lot of value in it. You can find anything from furniture, to paintings, to office equipment. We try to avoid food as much as we can.

What’s the top thing that you’ve found in the trash?

Elizabeth Tran: When I pieced it all together, it would probably be the gown that I made for Miss Florida USA this year out of trash materials, including, actually, the hazmat suit I wore on the show, and CDs and protein bar wrappers! Making it something beautiful is probably my favourite thing.

Rosanna Tran: I found a jewellery box. I cleaned it out, repainted it, and it looks like a nice antique jewellery box. I’ve never priced it, but I've been using it and that's already very valuable.

Charisma Tran: I would have to say there was a door runway, and that was probably the most used and the most valuable to me.

What was it like watching the first episode together?

Rosanna Tran: It was really fun to watch the first episode together. For me, the only surprise was when I say, “You owe me $0.12!” I thought that was off-camera, and I was just kidding! The producer never paid me the $0.12, though…

Elizabeth Tran: I wasn't there for some of the other scenes (while shooting). Like, I saw my mom using the little swimming spa thing to clean, but I did not see my older brother swimming as he did, and I just thought it was so funny! My whole family, they're so hilarious, and it really cracked me up. It was something we all enjoyed. Sometimes I cringed, but mostly we enjoyed it together.

Charisma Tran: When I first saw the show, I was looking at all of us and we all looked really good!

TLC (DStv channel 135) is available on DStv Premium, Compact Plus, Compact, Family and Access. To get DStv, click here.