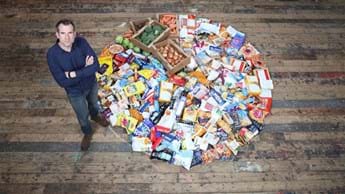 DStv is the perfect place to let your curiosity run wild.

Doc Tulleken performs experiments on himself to understand childhood obesity in What Are We Feeding Our Kids? . Sue Perkins: Along The US-Mexico Border explores how US and Mexican citizens really live their daily lives on either side of the infamous wall.

Leigh-Anne Pinnock from the British all-girl group Little Mix exposes her experiences with deep-rooted racism in the music industry in Leigh-Anne: Race, Pop & Power,while true crime doccie Murder For My Man takes a look at why women would kill for the men they love.

Then The World of Bridges will scratch that itch if you love shows like Abandoned Engineering. And if you are fascinated by the mysterious, the new season of The Curse of Skinwalker Ranch is here.

What Are We Feeding Our Kids?

Dr. Chris van Tulleken goes as far as experimenting on his own body as he delves into the topic of childhood obesity in an effort to find answers and inspire change.

Sue Perkins: Along The US-Mexico Border

Sue Perkins explores the daily lives of ordinary US Americans and Mexican people who live on either side of the US-Mexico border, from the Pacific Ocean to the Gulf of Mexico.

Little Mix star Leigh-Anne Pinnock talks about her experiences of racism and colourism as a black woman in the UK, especially within the music industry where she was flooded with outright abuse and constant microaggressions.

The World of Bridges S1

This documentary explores bridges both as construction projects and as cultural monuments, from China's Wind and Rain Bridge, to the Millau Viaduct in France, the Howrah Bridge of Calcutta, to Zimbabwe’s Victoria Fall Bridge and more.

Watch on Monday, 9 August on Curiosity Channel (DStv channel) at 19:00

The Curse of Skinwalker Ranch S2

Aerospace engineer Dr. Travis Taylor and real estate tycoon Brandon Fugal’s search for signs of extra-terrestrial life continues underground at Skinwalker Ranch in Utah. This season a rabbi is called in to perform an ancient ritual.

Murder For My Man S2

This true-crime series explorers’ stories about how the desire to please a man can drive a woman to commit unspeakable crimes. In S2, a young woman is swept off her feet by a drug kingpin.