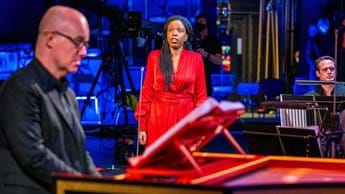 Let your curiosity run wild this week on DStv with amazing documentaries and factual series that inform, educate and inspire.

Secret Wars Uncovered reveals shocking facts behind modern warfare shrouded in secrecy and misinformation. 2 construction doccies series, What Went Wrong: Countdown To Catastrophe and Abandoned Engineering S5, shine a light on our fascination with engineering projects and buildings that were abandoned or unfinished. And true-crime doccies Very Scary People S2 and Snapped: Killer Couples S11 & S12 take us into the dark hearts of killers.

On a more hopeful note, Take Me To The Opera reveals how 4 inspiring opera singers have weathered the pandemic despite performance spaces being shut down worldwide. And The Psychedelic Drug Trail: A Cure For Depression explores new studies on treating mental illness.

Take Me To The Opera

Zeinab Badawi profiles 4 opera stars: Cecilia Bartoli, Juan Diego Florez, Benjamin Bernheim and Cecilia Rangwanasha. They share their unique stories about the challenges thrown at them by the pandemic.

The Psychedelic Drug Trial: A Cure For Depression

This documentary follows scientists and psychotherapists led by Professor David Nutt, Dr. Robin Carhart-Harris and Dr. Rosalind Watts as they test the effects of psilocybin on clinically depressed patients.

What Went Wrong: Countdown To Catastrophe

Small errors in the construction of buildings and vehicles can have tragic consequences. 4 1-hour documentaries play back-to-back, covering cases like the Eschede Train, Challenger Shuttle disaster and the collapse of the Morandi Bridge.

Structures of steel and iron, now covered in weeds, moss and rust, eerily stand unfinished after they were abandoned midway through construction. This show explores what they could have been.

Watch Mondays-Fridays, from 2 August on Discovery Family (DStv channel 136) at 19:20

First-hand accounts blow the lid off the myth that the American Mafia didn’t deal drugs. Real players from the Mafia and undercover law enforcement officers reveal the American Mafia’s role in getting the United States addicted.

Watch from Thursday, 5 August on National Geographic (DStv channel 181) at 21:00

Donnie Wahlberg hosts this look at the twisted lives of some of the most diabolical characters in recent history, including Dr. Michael Swango, Robert Durst, Edmund Kemper, Richard Ramirez, Dennis Rader and others.

This true-crime series delves into the stories behind couples who kill together. From a teenage couple who embarked on a multi-state crime spree, to lesbian lovers who stopped at nothing to eliminate 1 of their husbands.

Documentary series about major covert battles fought around the world based on political corruption and corporate greed. From the Russian Federation's annexation of the Crimean Peninsula in 2014, to battles in Mali, Kashmir, Loas and more.