The Clockwork Girl, Ninja Express and kids’ sports highlights this week on DStv 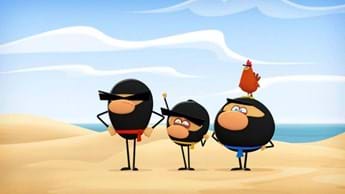 Do your kids have Olympic fever? Get them in front of the telly for the amazing and inspirational Da Vinci Sports Day on Saturday, 24 July.

DStv’s School of Laughter is having an all-out animation extravaganza, too, with The Clockwork Girl and Despicable Me, as well as the wildly imaginative new series Ninja Express. And by our ears and whiskers, there are new episodes of kids’ shows 44 Cats S2 and Kid-E-Cats S2.

Watch, laugh and learn with even more children’s shows and movies in DStv’s School of Laughter. And for more snack-sized info on DStv’s biggest shows, check out #OhSnack on the DStv YouTube Channel.

3 little ninjas run a delivery service that delivers anything, anywhere and anytime! If you want a dinosaur delivered to your doorstep, Kiro, Konpeki and Aka will help you get it with their superpowers.

Computer-animated series 44 Cats is about how cats see our world and how they live when we’re not around. And in new episodes, Cream organises an original game titled Cat Calls Colour, using the ice-cream cakes that he has prepared.

Kitties Cookie, Pudding and Candy learn to look before they leap with their boundless imaginations, as they go on extraordinary journeys together to have fun. In a new episode this week, they learn about kindness and archaeology.

In this animated movie, the townsfolk of Harraway are deeply divided over whether to treat a strange illness called The Blight by giving life to mechanical creatures, or by creating mutants using biological engineering.

Villainous inventor Gru is determined to steal the moon, and his plan involves a shrink ray, 3 little orphans, his horde of yellow minions, and a big loan from his local evil bank.

Gru – the world’s most lovable villain – and his minions return for another adventure. This time, he is recruited to help bring down a bad guy while trying to raise 3 growing girls.

A magical family film starring British actress Emma Thompson (Baroness in the Disney film Cruella) as a mysterious nanny who teaches 7 naughty children some valuable lessons about being well-behaved.

16:45 Odd Squad: O Games
In this 2-part episode, Odd Squad agents compete in Olympic-style games to determine who gets to be Ms. O for the day.

17:05 That’s Cool! Why Does Your Heart Beat Faster When You Do Sports?
Find out why your heart and lungs have to work harder when you exercise.

17:10 When I Grow Up: Sports Statistician
Mikaela meets sports statistician Meghan to discover how maths and data are used to help athletes to improve their performance.

17:25 Did I Mention Invention? Ski Jump Slip ’n Slide
Host Alie Ward presents printable pancakes, a way to get power from rivers, the physics behind a waterslide, and windmills the size of a flea.

17:45 Matilda and The Ramsay Bunch: The US Sportsday
Matilda and her family head to the coast to watch the world series of beach volleyball. Matilda creates a fantastic picnic.

18:00 Matilda and The Ramsay Bunch: The Number One Sport
Matilda and her family learn how to play American football, the most popular sport in the US, and they attend cheerleader training and Matilda prepares food to celebrate the game.

18:15 Matilda and The Ramsay Bunch: The Coolest Sport in LA
Matilda and her family do ice hockey training in California. For lunch, she serves hot soup and chicken. Then she gets some hockey players to help her make a dessert.

18:35 Horrible Histories: Outrageous Olympics
To celebrate the Olympics, Rattus Rattus takes a look at sport through the ages.

19:05 Horrible Histories: Strange Sports and Roman Emperors
England’s King speaks German, there are strange goings-on at the Highland Games, gunpowder toothpaste is invented and the Roman Emperors get together.

20:05 Xploration Awesome Planet: Sports & The Environment
We meet an Olympic snowboarder who aims to keep our mountains protected. Then it’s off to Hawaii where a professional surfer teaches kids the importance of keeping our oceans and beaches clean.

20:30 Did You Know? The Incredible Impact Of Sport
Should we really turn our children into champion sports stars? What are the real effects of sports on our bodies? Do records have a limit?