Mermaids, hobbits, serial killers & more – all in this week’s movie line-up on DStv 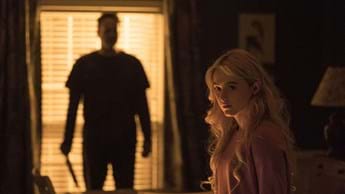 Ward off the winter blues with a wave of your remote control… and a magical DStv movie.

Horror comedy is in store when Vince Vaughn’s serial killer character swaps bodies with a nerdy teenaged girl in Freaky. There’s more deadly fantasy in store with a killer painting in Detection of Di Renjie 2 and there’s a Killer Mermaid on the loose, too!

Fantasy lovers, the online streaming platform Showmax has a special treat for viewers with the amazing trilogies of The Hobbit and The Lord of The Rings.

And rom-com is also on the menu with Always A Bridesmaid.

Grab the remote and get cosy on the sofa. And for more snack-sized info on DStv’s biggest shows, check out #OhSnack on the DStv YouTube Channel.

In this fun slasher horror comedy flick, bullied teenager Millie Kessler (Kathryn Newton) swaps bodies with middle-aged serial killer The Blissfield Butcher (Vince Vaughn), thanks to a magical ancient dagger that he tried to stab her with.

During Empress Wu’s reign, several bizarre deaths in the capital city of Chang’an are linked to the Martyrs Shrine’s Flying Goddess Mural. Detective Di investigates, and the trail leads him on a twisted path.

A carefree Mediterranean vacation turns into a fight for survival when 2 young American women and best friends uncover the watery lair of a murderous mermaid hidden beneath an abandoned military building.

Corina (Javicia Leslie) is always asked to be the bridesmaid for everyone’s wedding, but never the bride. She starts wondering if she will ever be at the altar in something other than a bridesmaid dress.

The Lord of The Rings & The Hobbit Trilogies

Set in the fictional world of Middle-Earth, The Hobbit and The Lord of The Rings trilogies follow hobbits Bilbo and Frodo Baggins as they undertake a dangerous quest to destroy the One Ring and its maker Lord Sauron.

Watch from Thursday, 29 July on Showmax