Inside the maturity & mourning in Little Women: Atlanta S6

Inside the maturity & mourning in Little Women: Atlanta S6

Little Women: Atlanta cast members Ms. Juicy and Monie pull back the curtain on S6 of the reality show on Lifetime (DStv channel 131) 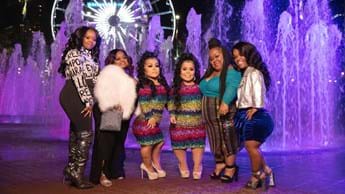 If you’re looking to laugh, cry, and get emotionally invested in a group of friends either poke fun or argue with each other, then resolve their conflict with a lunch date followed by a round of skinny martinis, then Little Women: Atlanta should be on your watch list, Thursdays on Lifetime (DStv 131) at 20:05.

Buckle up for an explosive season as Amanda and Andrea Salinas aka The Tiny Twinz as well as Abira Greene – who is promoted from recurring friend-of-the-show to main cast member – are packing the punch. And after taking a hiatus in S5 (2019), Tiffany “Monie” Cashette returns to Atlanta to join in the fun.

According to fan-favourite Shirlene King Pearson, otherwise known as her stage name Ms. Juicy – the self-proclaimed Queen of Atlanta – S6 of the reality show is not only the best but it’s the most emotionally-charged season yet, as the ladies mourn the death of cast member Ashley "Minnie" Ross, who passed away following a tragic car crash while filming in April 2020.

At the end of each episode, you can stay tuned for the real behind the scenes tea with Loni Love in her 30-minute after-show with the cast, Little Women Atlanta: Unfiltered. Loni sits down with the ladies to get the inside scoop on each episode. Lifetime has matched up their broadcasts, so this will directly speak to the on-screen action in S6. Keep a close lookout for the upcoming Thursday, 3 June episode, in which the Little Women and Loni talk about their lost sister, Minnie, and how they united to support each other following her death.

To Minnie: With love

“We may fight and rub each other the wrong way at times but we eventually come together and give Minnie a beautiful send-off that she deserves. Minnie was dear to us, so we come together as sisters,” explains Ms. Juicy. “There is a lot of growth from all the cast members [following Minnie’s death]. Viewers can expect to see the girls rising. We also discuss our new normal during a global pandemic. We’re taking you into our private lives like never before.”

Atlanta is where Monie’s heart is

Apart from her personal issues, which involve a custody battle with her ex-husband, Morlin Ragland, Monie is searching for a place to live this season. Being the good friend that she is, Ms. Juicy offers Monie a place to live while she gets back on her feet. “Atlanta is the place to be if you’re trying to get your career rolling. I knew that I had to return to Atlanta, find Ms. Juicy, who is the plug [in the entertainment world]. It’s tough [financially, at first]. But thanks to Ms. Juicy for pitching in and helping me to get things going. There are plenty of ups and downs for me this season, but you’ll have to watch because there’s always something happening in Atlanta,” says Monie.

Due to COVID-19, there are strict regulations while filming, which took some adjusting for Monie. “We used to get in each other’s faces during confrontations. We can no longer get close to each other, even when we are out and about,” explains Monie, adding that the production team ensures that the cast members are safe while the cameras are rolling. “We are always testing. It sure is different [to filming S4], but we managed to get through it – together.”

But it’s not just COVID-19 calming the Little Women’s encounters. Ms. Juicy reveals that viewers will notice a change in the cast as she believes that they’ve evolved. While there are tongue-lashing moments that end with the reality show’s security guards intervening – or wig-snatching moments – there aren’t as many as in the past. “We did a lot of maturing throughout the years. You’ll see in the way we settle our disputes,” says Ms. Juicy, who’s grown into a peacemaker. “I improved on my end. Rather than to [react in fury], I stop, wait, and listen to the other women when they voice out their reservations. I take my time to listen and see what they need. What are they going through? How can I assist them? I do this, not only for 1 person but everyone. I become a leader.” Ms. Juicy, can we hire you out to the Housewives franchise?

Coming together for a bigger cause

To prove her leadership capabilities, Ms. Juicy rallied the Little Women of Atlanta circle to take part in the Black Lives Matter protest, and we’ll see them in action this season. “In that moment, we put all our differences aside and unite for a cause that’s bigger than us. It doesn’t matter what age you are, your size, or nationality. This [racial and social equality] is bigger than our tiffs. Coming together in a non-violent way for the greater good was something that we needed to do as a cast. It’s a prime example of sisterhood,” explains Ms. Juicy.

And remember that each episode is followed by Loni Love’s behind-the-scenes show, Little Women Atlanta: Unfiltered on Lifetime (DStv channel 131) at 21:15