2 Jokers, a spy network and a hurricane

Batman & The Joker go rogue, a hurricane threatens and whirlwind of Kung Fu movies, all coming this week in DStv’s movie line-up. 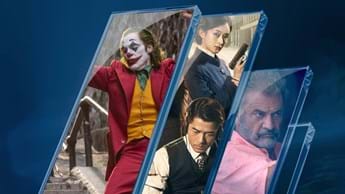 Take a ride on the wild side with DStv’s newest action-packed movies. We kick things off with the award-winning film Joker in which actor Joaquin Phoenix gives a chilling rendition of the Joker, a mentally unstable man who strikes fear into the minds of residents of Gotham City.

There’s hurricane madness in Force of Nature in which 2 police officers must evacuate people from the city while trying to avoid a panic-buying stampede, and then we have Kung Fu action in 3 brand-new KIX (DStv channel 118) movies, The Master of Kung Fu, Fearless Kung Fu King and Eternal Wave, where martial arts schools, rivals and revolution at the order of the day.

Robert De Niro is out to win a prank war in The War With Grandpa and there’s a super-duper Superhero movie weekend on Studio Universal (DStv channel 112), with DC Comics and Marvel comic heroes!

Grab the remote and get cosy on the sofa – when you check out DStv’s home cinema collection here. And for more snack-sized info on DStv’s biggest shows, check out #OhSnack on the DStv YouTube Channel.

As a hurricane approaches Puerto Rico, police officers Cardillo (Emile Hirsch) and Jess Peña (Stephanie Cayo) must weather the chaos of evacuating people and dealing with a last-minute panic-buying stampede. But thieves are plotting to take advantage of the general confusion to rob a building in search of a valuable collection of paintings.

The Grandmaster of Kung Fu

In the late Qing Dynasty, Grandmaster Huo Yuan Jia leads the martial artists of Tianjin as they defend the country against Japanese invaders. Meanwhile, Japan’s top martial arts master has opened a new academy where he’s defeated all the Chinese martial arts masters who’ve come up against him… so far. With Dennis To, Zhuang Han, Li Ruo Xi.

Young Huo Yuan Jia runs away from home and sets up his martial arts school in Tianjin. Once established, he invites martial artists from all disciplines to spar at his academy. And through working with the reformists and revolutionaries, he comes to understand how he can save his country. With Hu Guo Fang, Wang Ya Bin, Zheng Zhong Yu.

Sunday nights in July belong to rising Asian action star Aaron Kwok. In 1937, communist resistance fighter Lin Xiang (Aaron Kwok) is sent to Japanese-occupied Shanghai where he must rebuild the resistance networks in the city which have been nearly completely dismantled following a Japanese raid on their secret headquarters. With Zhao Li Ying, Zhang Han, Zhang Lan Xin.

The War With Grandpa

Robert De Niro and Uma Thurman star in this family comedy about widower Ed and his daughter Sally’s efforts to get him to move in with her family. Both unhappy with the situation, Ed and his grandson Peter (Oakes Fegley) agree to an obnoxious prank war. Based on the 1984 children’s book of the same name by Robert Kimmel Smith.

This TV movie focuses on the 1990 Oslo Peace Accord between Israel and the Palestinian Liberation Organization and recounts the true life, previously secret, back-channel negotiations that took place to create and sign the accord into effect. Starring Ruth Wilson, Andrew Scott, Jeff Wilbusch, Itzik Cohen, Waleed Zuaiter, Sasson Gabai.

Watch from Friday, 2 July on Showmax

Gotham billionaire and vigilante Batman (Ben Affleck) and Kryptonian farm boy-turned-Metropolis reporter Superman (Henry Cavil) are on a collision course. Superman has cropped up on Batman’s radar as a threat to humanity. Meanwhile, Superman, having caught wind of Batman’s violent approach to dealing with crime, is on a mission to expose him in The Daily Planet.

The US government assembles a group of career criminals and supervillains to take on the metahuman threat around the US. The team includes Deadshot (Will Smith), criminal mastermind the Joker (Jared Leto) and his girlfriend, crazy psychologist Harley Quinn (Margot Robbie), and sword-wielding Tatsu Yamashiro (Karen Fukuhara). If any of them dare make a mistake, heads will be blown off.

Dr. Bruce Banner (Edward Norton) develops a violent, giant green mutant alter-ego after he’s exposed to gamma radiation during a failed experiment in creating super-soldiers. Following a destructive burst of rage, Banner vanishes to South America, where he works on a cure for his condition. But the military want to use his alter-ego, The Hulk, as a weapon.