Christopher Meloni reprises his role as Elliot Stabler in the newest addition to the infamous Law & Order franchise. Watch him reunited with his old partner, Olivia Benson, in Law & Order: Organized Crime. 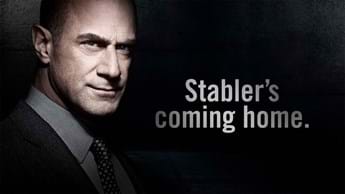 Elliot Stabler retired from the Special Victims Unit following the S12 finale shootout in the squad room, during which he killed the shooter.  He was then placed on probation, ordered to undergo psychological evaluation and therapy, and a review of his entire career. Instead he left.

After a few years, he returned to the NYPD in a new post as their liaison to law enforcement in Rome. So Stabler was living it up in Italy, targeting terrorism and Organized Crime.

Stabler returns to SVU to honour his former partner Olivia Benson (Mariska Hargitay), during what’s meant to be a brief return to the US for a department meeting in S22 episode 9. But a car bombing leads to personal tragedy for Stabler.

At the end of the season Stabler also shows up late to an SVU wedding, leading to an intriguing toast to partnerships between himself and Benson.

Stabler officially relocates to New York and becomes part of the OCCB (Organized Crime Control Bureau) task force. While he works on a deeply personal case in his down time, officially he’s out to unmask the crime family who’ve been selling fake respirators and PPE overseas.

The season premiere sees Olivia slipping Stabler a little help under the table, and attending a family funeral with him.