From chaos to calm with The Three-Day Nanny Season 3

Professional nanny Kathryn Mewes has a promise for parents and kids who’re in a tough spot: she can make their household work peacefully in just 3 days. Fussy eaters, temper tantrums, violence, parents and kids who just don’t listen and sleepless nights? Solutions spotted, tested and working in just 3 days. Nanny Mewes uses her 20 years of experience on the job to advocate for children, help parents to see what’s happening from their point of view, and to give parents the tools that they need to give their kids a calm and consistent home. 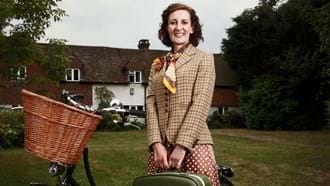 How does she do it? The Three Day Nanny

Kathryn Mewes takes us inside The Three Day Nanny and talks about what’s changed since she became a mom herself.

Mom and dad Chris and Becky are having problems with their little boys, Bobbie (3) and Freddie (2). They will pinch, punch, kick or bite anyone in sight. Chris and Becky are afraid to take them out in public in fear that they’ll become playground bullies or hurt another child. Kathryn shows them how to be consistent and calm with discipline, and how to watch over them in public without constantly interfering.

Kathryn Mews has a no-spanking rule that she’d like dad Anthony and mum Angeline to follow. She has other ways of getting their kids – Alessandro (6), Carmelina (5) and Luciano (3) – to stop, listen and do as they’re told. The Three Day Nanny also needs to step in to help everyone in the family to get a solid night’s sleep so that everyone is less reactive.

Single mum Rosie Parsons has 4 children under the age of 3. Triplets Summer, Sienna & Jacob (2-and-a-half) were IVF miracle babies, followed by Zach (13 months). But once the kids were in the picture, her marriage fell apart, leaving her with no support and 4 kids demanding every scrap of her attention. While 1 triplet clings physically and hampers Rosie’s movements, the other children run wild, wrecking rooms, hitting and biting. Kathryn has tricks to help Rosie deal with all her children with confidence and stand up to both clinginess and wildness.

Emma and Mike are worn to a hair by their daughter Bella’s (3) screaming tantrums that last hours the moment she’s asked to do anything, from brushing her teeth to getting dressed. Kathryn needs to show Emma and Mike how to work effectively as a team instead of 1 giving in and giving up while the other is forced to be bad cop 24/7. But little Bella isn’t a fan of Mom and Dad pushing back.

Sebastian Cori-Watts (2) will bang his head against the wall, floor and furniture, and hit, bite and kick to get his parents attention and his way. Mealtimes stretch for nightmarish hours and he acts out in public, bolts for the horizon and refuses to be restrained. Sebastian was Livia and Paul’s miracle baby, and now they’re going to need to learn to ignore some of his worst tricks.