Africa is known for its beautiful landscapes and vibrant people. 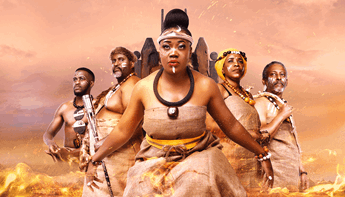 The African continent is known for its beautiful landscapes, diverse and colorful people, as well as its rich history. This beautiful place forms the foundation of who we are, how we live our lives, and which values we stand by. It goes without saying that because we are so different from the rest of the world, our interests are in a league of their own.

Africa has produced some of the most memorable and talented personalities in the last hundred years or so – people who can stand up with the best Hollywood has to offer. Join us as we take a look at some of the shows and movies that continue to put Africa on the map and help tell our unique real-life stories and inspired fictional tales.

Uthando Nes’thembu
Take a dive into the world of polygamy. Explore the good, the bad, and the unconventional as Musa Mseleku tries to keep the peace between his four wives and maintain his unique African lifestyle. This reality show is unlike anything you’ve seen before, so get ready for an intriguing and explosive fourth season, airing 16 September at 20:00 CAT on Mzansi Magic, DStv Channel 161 – South Africa

Africa’s Big Five
There’s no better way to celebrate nature’s majestic beauty than by seeing it at its source. In this series, you'll learn more about your African roots by discovering the renowned indigenous animals that call Africa home. From rhinos to elephants and the king of the jungle himself, journey into the bush for an inside look into these animals’ fascinating lives on the plains of Africa. It airs on 22 September at 18:50 CAT on National Geographic Wild, DStv Channel 182.

Damned Royalty
Get ready for a show that speaks to tradition, rituals, and a clash between a ruler and his people. What will become of the land if the ruler remains in control, and will the gods need to step in to restore the balance? Find out Fridays at 10:35 CAT on ROK2, DStv Channel 169.

Our Perfect Wedding Uganda
Weddings are the ultimate expression of love, tradition, culture, and – in Africa – total uniqueness. But as anyone who's planned a wedding before will tell you, it doesn’t always go to plan. Sometimes it is stressful, full of drama, and, often, pretty hilarious. This reality TV show will take you down the aisle and give you honest insight into what it takes to pull off the perfect African wedding – clingy mothers-in-law and all! Catch the next episode Mondays at 20:00 CAT on Pearl Magic, DStv Channel 161- Uganda

Ubuntu
Already in its third season, Ubuntu, meaning family and having compassion for your fellow beings, looks at the gender-power dynamics typical to most African societies. This drama series is filled with unexpected twists and turns, and a power struggle with the most spellbinding ending. Watch what happens every Monday to Wednesday at 21:30 CAT on Zambezi Magic, DStv Channel 162.

Africa is not only home to amazing people, but also where talented storytellers take the stage, where wild animals roam free, and where diverse cultures create a melting pot of rituals and traditions. Fuel your love for Africa by downloading the DStv app to enjoy live streaming services, and the MyDStv app to manage your subscription from the comfort of your home. Let's celebrate African beauty every day!

On your Screen 14 October 2021
Are you not entertained? Enjoy the best African entertainment this October

Guess what? It’s another brand-new month and we’re once again taking your home entertainment experience to the next level with exceptional local and international content.