AKA Orchestra On The Square – Everything You Need To Know

News
20 February 2019
The Supamega will be giving his impressive catalogue of timeless bops the much deserved elevated classic treatment this March. Here's what you need to understand.
Subscribe

Multi award-winning musician, AKA, is set to make history with his upcoming event, AKA Orchestra On The Square, which will take place from 16:00 on Sunday, 17 March 2019, at the Sun Arena at Time Square in Pretoria.

Created, developed and produced in partnership with Mahogany and Vertex Events, AKA Orchestra On The Square will see the gifted performer take stage with a 30 piece orchestra, a first in South African history for a Hip Hop act. 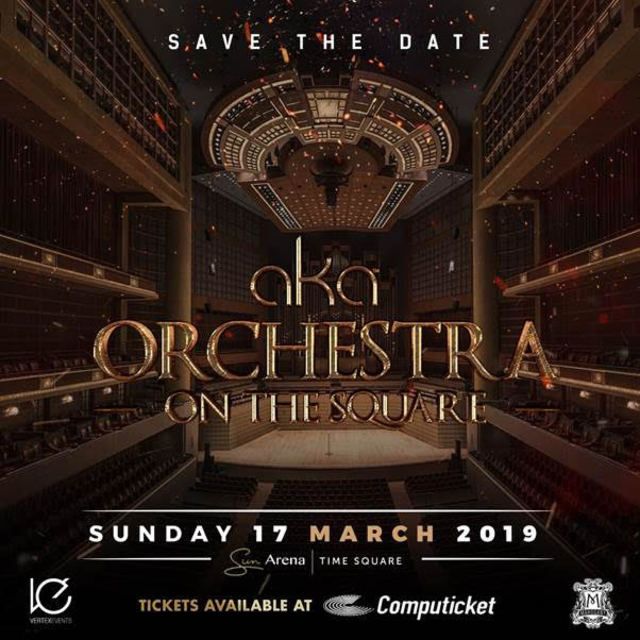 “This is something I’ve wanted to do for a very long time. I want to give my fans a different opportunity to see me perform,” expresses AKA.

Tickets for AKA Orchestra On The Square range from R200 – R450 and are available at Computicket outlets nationwide and online.

AKA has played an integral role in the South African Hip Hop landscape for the past decade. The past 5 years have seen him as a standout musical act across all genres not only in the country but across the African continent. Each year, AKA has managed to elevate his brand and dominate the airways which is testament to his musical genius and work ethic to raise the bar.

Known for his outstanding performances, AKA Orchestra On The Square will provide yet another opportunity for the Supa Mega to showcase his talent. AKA is expected to bring his youthfulness, creative intellect and musical genius to what at first glance may seem like a “dated” event concept mistargeted at his core audience.

RELATED: REMEMBER WHEN AKA DROPPED 'TOUCH MY BLOOD'

AKA fans and good music lovers can be assured of a one of a kind experience at AKA Orchestra On The Square. AKA will perform his greatest hits from his catalogue of music from four albums: Altar Ego, Levels, Be Careful What You Wish For and Touch My Blood.

The announcement of AKA Orchestra On The Square comes off the back of AKA winning Best Hip Hop at the annual Sound City MVP Awards Festival which took place in Lagos, Nigeria last weekend and has set the tone to what is expected to be a big year for him.

Keep posted to AKA on social media for updates on AKA Orchestra On The Square and make sure to head over to Computicket to secure your place and be part of history in the making.

News
23 October 2019
AKA Touches Diamond!
Supamega collects diamond plaques for various hits
News
26 February 2019
The Bacardi Holiday Club – Everything you need to know!
Bacardi Holiday Club, in association with Channel O, returns to deliver an elevated party experience that blends a great turn up with good adventure. A good ingredient for timeless memories!
News
17 September 2020
Cardi B and Offset are No More
Hip Hop's leading couple end their marriage after three years.
News
07 September 2020
Master KG, The Weeknd, Dua Lipa on The Channel O Top 30
Stay on the pulse of the hottest chart in the land.