News
14 September 2019
There has been no shortage of shockers in the Pepper Dem House and like the theme of the Season, it really brings drama.
Get DStv PREMIUM

Your gossip girl is back and I’m not alone. Would you believe me if I told you that Jidenna has been with me since his visit to the House? Let me clear all the doubting Thomas(es), don’t worry you’ll get the wedding invitation soon. Speaking of ships, l need cupid to revisit Biggie’s House and shoot love and sense to the couples abeg. Don’t you think?

There’s nothing like a Pepper Dem love story without a breakup story (ask Ike and Mercy). Forget the Icy ship, Seyi and Tacha gave me my first heartbreak this year. See me anticipating a reunion after the Saturday Night Party and just when they gave me hopes of reconciliation, I started hearing insults. Eh? “Fine body but no fine brain” “Twenty-nine-year-old twat” ahan, what’s happening here o. I thought that was the end of the gbas gbos season when Tacha walked out on Seyi. I even commended her for being a bigger person and trying to avoid Strikes. Boy, was I wrong!

As if waiting for the perfect time, as soon as Ebuka asked Tacha what she felt about Seyi’s words to her, Port Harcourt’s first daughter did not even waste time. From calling him a drunk to saying Seyi has not achieved what she has achieved at age 23. Wait, what? I don’t even know if it’s what she said or what how Diane and Elozonam reacted to what was said that made me laugh the most. I mean even Ebuka was lost for words and so was sugar daddy. If someone had said those words to me, na to just pack my bags, carry my load on my head and start trekking back to Jidenna’s house.

At this rate, I’m not even shipping any couple in that House again. These small children cannot be giving me a headache every night. Ahan. Well now that there’s silence in their ship, how awkward will Saturday Night be for them? Can’t wait!

Ah Nollywood has got nothing on Omashola abeg. Baba dey form “eenie, meenie, miney mo” and Replaced himself with Seyi. Next thing my ears got blocked because Omashola decided to start screaming like a lost chicken. Like was it not his mouth he used to call Seyi? Abi did anybody put a gun to his head? Ah, baba, I hail you oo. He even ran out of the Lounge to the Garden and it took Biggie’s voice to call him to order. I was even expecting the Ninjas to come and hold him down, I was afraid oo.

I have a suggestion o Big Brother, henceforth, bring me to your House during Nominations so I can come with my cane. All the dramatic Save and Replace movements that these your guests are doing dey vex me. Once they see cane, they’ll drop names with their chests. Every Nigerian understands, abi? 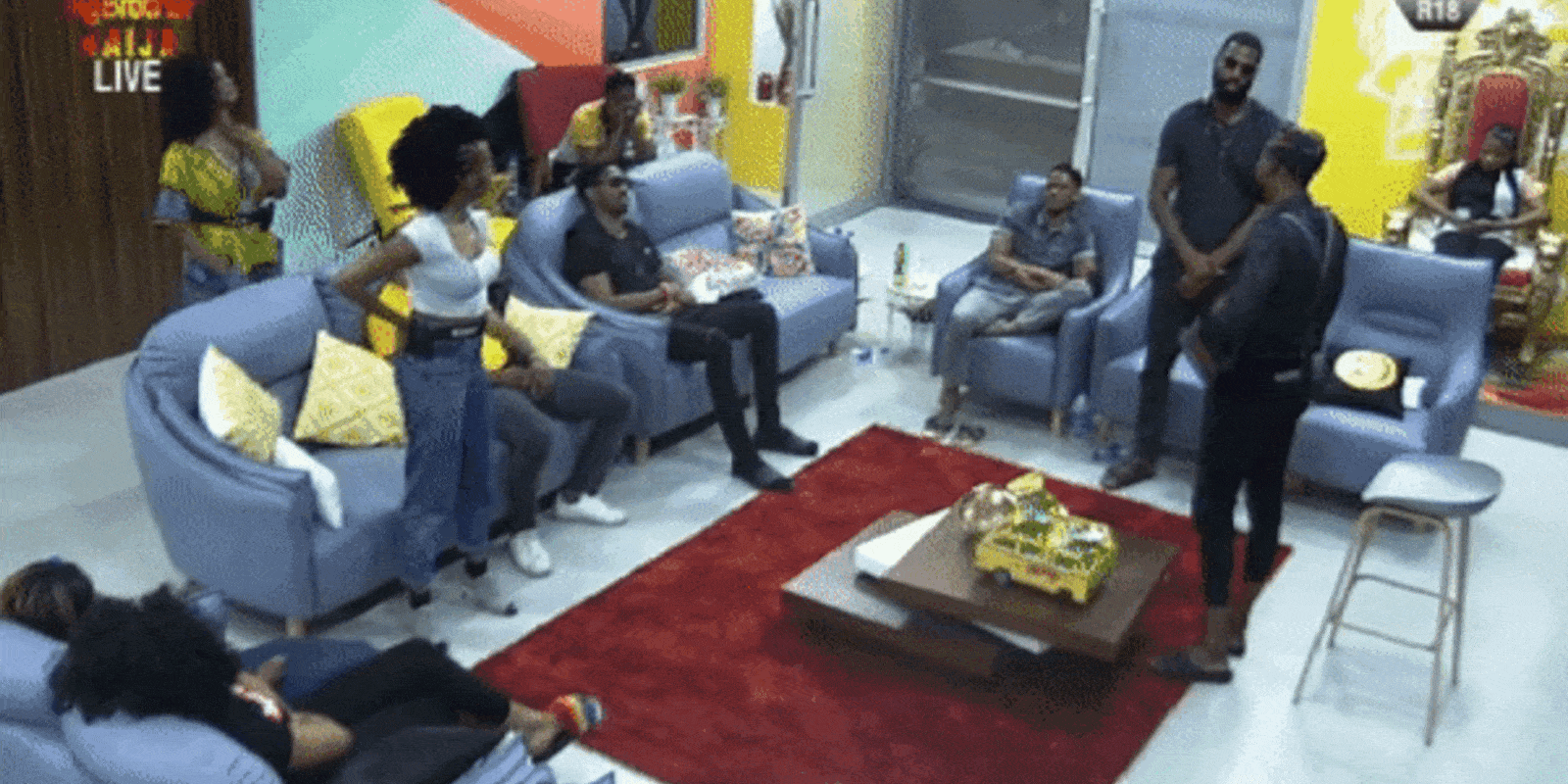 Let me go and report to Big Brother that Frodd has turned his House to Balogun market. The fight for Immunity is not a joke in the House and luckily for him, he’s just a hundred Coins away from making the move. I don’t even mind Frodd asking the Housemates for Coins o but what I don’t get is why he tried blackmailing Cindy for hers. It’s as if slow tiger has forgotten that baby girl is made of Aba skin. She keeps reminding them in that House but Frodd no dey hear word.

How will you say you want to use her Coins to buy Immunity? No be game everybody dey play? I trust my girl Cindy, she did not even waste time before declining his offer. She even told him that she wants everyone in the House to go so. In other news, carry your market sense and go jor.

“Ike, let me tell you something, no diamond, no knacks for you,” Mercy bluntly told Ike.

Well, Chioma has gotten assurance, Mercy is trying to secure hers with Ike and I’ve already gotten mine with the classic man. Case closed, it’s diamond season! Wait o before we close the case, what did Ike mean by “we go lolo even before we leave the House”?

Hmm, let me sha be watching these kids.

In case you missed it, Cindy won the HoH crown this week and immediately Biggie asked her to choose a room partner, she called Mike’s name without thinking twice. She should have just told me she had a crush on the Cruisetopian president so I would have helped her pass the message across.

You can’t blame a sister, who wouldn’t have a crush on Mike? I mean have you seen him? Who else has wondered what would have happened in that House if Mike wasn’t married? Lol, let me just leave you with that thought.

It was at this moment the Pepper Dem Gang re-wrote the book of revelations in Biggie’s House.

All the juicy gist and I still find myself thirsty… Hold on, let me get a drink.

What’s the Pepper Dem House without food fights? Food oh, alcohol oh, and they’re ready to break their heads. For some reason, Frodd seems to be in the centre of all the food fights in the House sha.

Without caring about her Strikes, Tacha plainly told Frodd, “… do your worst” and this time around, it was alcohol that caused this frenzy. I live for the day these children will share food without turning the House into a battlefield. Abi Biggie, maybe you should starve them for a week sef, I want to see something.

Even with all the boss moves and wins in the House, baby girl is still love-struck. I almost thought she was getting distracted with all the activities in the House. Not until I saw her mentioning his name in about four conversations this week.

Asides Khafi, one person who still reminisces about love situations in the House is Frodd. I don’t think Omashola has forgiven Frodd for taking Venita from him o. If you see the way he cut Frodd short when lover boy was in his moment eh, you would pity him. That’s how Omashola started analyzing Frodd and Esther’s ship o. He went ahead to say Esther initially liked Nelson but ended up with Frodd because she basically had no choice and because she felt Venita was feeling the boy.

My chest was paining me when I was watching this moment. Ah Omashola, why? On behalf of Frodd, we’re sorry. Come to think of it, was Omashola right though?

I’ll leave you with this question while I go in to meet my man and for those of you who have not congratulated me yet, no invite for you.

Video
EmmaRose explain their separation – BBNaija
Liquorose and Emmanuel explain how their relationship came crashing down after they left Biggie's House.
Video
Day 40: Diamonds are Queen's best friend – BBNaija
Whitemoney flirts with Queen about an engagement proposal. Queen shares her ideal type of engagement and the ring matters. Queen loves her diamonds.
News
Day 72: Team White’s Airtel Conquest
Courtesy of Airtel Nigeria, team white campaigned their way into a “Touching Lives” win.
News
Day 66: Twitter's Spiciest Housemate?
Ever since she made her way into the Pepper Dem House as the product of Biggie’s twists, the president of the milf gang association has trended on Twitter for different reasons.