News
26 July 2019
Are the Pepper Dem Housemates living up to the personalities of the Superheroes they claimed they'd be if they were one?
Get DStv PREMIUM

Just like Gotham, Atlantis, and Metropolis, the Big Brother Naija Pepper Dem House could also do with superheroes so that in the brightest day, in the blackest night or just when a Housemate’s hands can’t reach the can of Dano on the top shelf, someone will always come to the rescue. Already, the Pepper Dem Gang have listed superheroes they claimed they’d be if they were one, so let’s go on a journey and see if they have so far lived up to the attributes of the heroes that they without fear, claimed they shared similarities with.

Tacha (Spider(wo)man)
Although she’s far from home and her comfort zone (Instagram), Tacha has been able to make a home of the BBNaija House and just like Spiderman, she is ready to take on anyone who threatens to her peace in the House. We can’t really call her the friendly neighbourhood hero (Nope! Nope! Frodd, Mike, Jeff and quite a lot of the rest of the Pepper Dem Gang would start a riot if we did.), but she does possess other traits similar to those of the web-slinger. Spidey understands what it means to stand for a cause and so does Tacha. Time and time again, Tacha has agitated for the equal representation of female Housemates in Task allocation. Some agitations that have gone ugly sometimes, but the point is she’s resilient about her cause.

Diane (Thor)
Diane picked the right time to be Thor as Marvel just announced that the next Thor is a woman. Too bad Natalie Portman already got the role, Diane could have been the one wielding Mjolnir. She might not get to wield the Hammer like her hero, but she did wield Sir Dee, Tuoyo and Nelson’s Hearts. 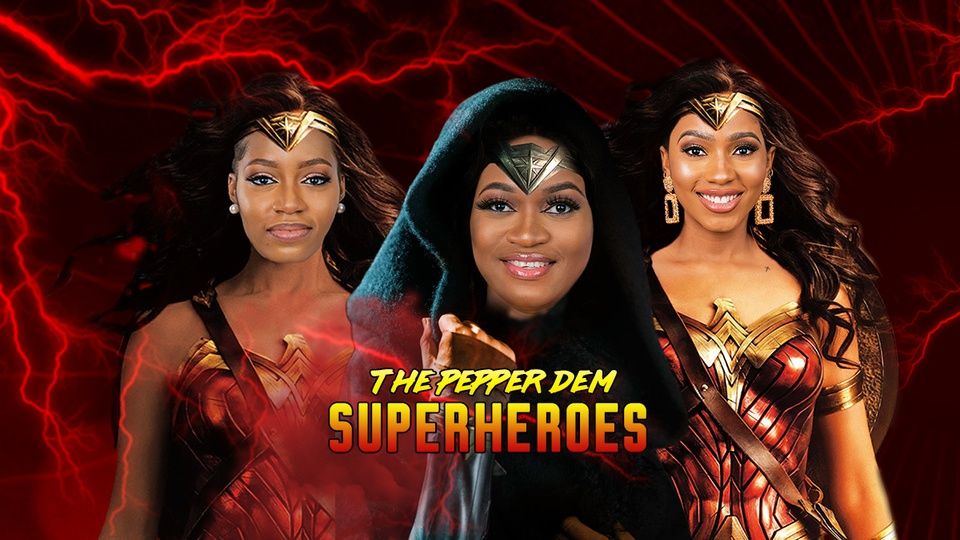 In such a short time, these three have proven why they deserve to be called Amazons. From them stepping up their game during the Bet9ja Arena Games to holding their own in the House filled with men, these Pepper Dem Amazons have shown they have the strength, wisdom and beauty (duh!!!) to be Wonder Woman. Although Khafi’s performance in the Circus Game might be a cause for concern; but should any situation ever need a prayer warrior Wonder Woman, we know she’s got this. Mercy tamed the notorious playboy Ike and Thelma stood up to Omashola when he tried barging into the bathroom. Need any more proof that these ladies really are the superheroes they claim they’d be?

Esther (Jean Grey)
A couple of things we know about X-men's first lady (Yes, we know, you think Storm should be the first lady, but can she wipe out a large population with her mind? No? case closed) are that she is fearless, courageous and passionate about what she believes in. It’s safe to say these qualities aptly describe Esther. If anyone of the Housemates truly embodies the superhero, they say they’d be, its Esther. From her passionate belief that people with Down Syndrome be acknowledged by their appropriate name and how she courageously led her team to their first Wager Task victory, Esther is truly the Jean Gray the House deserves. Just like Jean has her dark side (We all saw Dark Phoenix), so does Esther. Her volcanic outbursts when dealing with her fellow Pepper Dem Housemates comes to mind. And just like Jean has to contend with love from Wolverine and Scott (Cyclops), Esther has to deal with Frodd and Nelson.

Jackye (Captain Marvel)
Her success at the Pepsi “Know Da Lyrics” shows us she has the winning tenacity of Captain Marvel. But what we really need is for our in-house Captain Marvel to show up often to the party. We understand superheroes live secretive lives but, you can’t afford to hide from the fans waiting for a show. We need a superhero on top of her game and not on top of her bed. 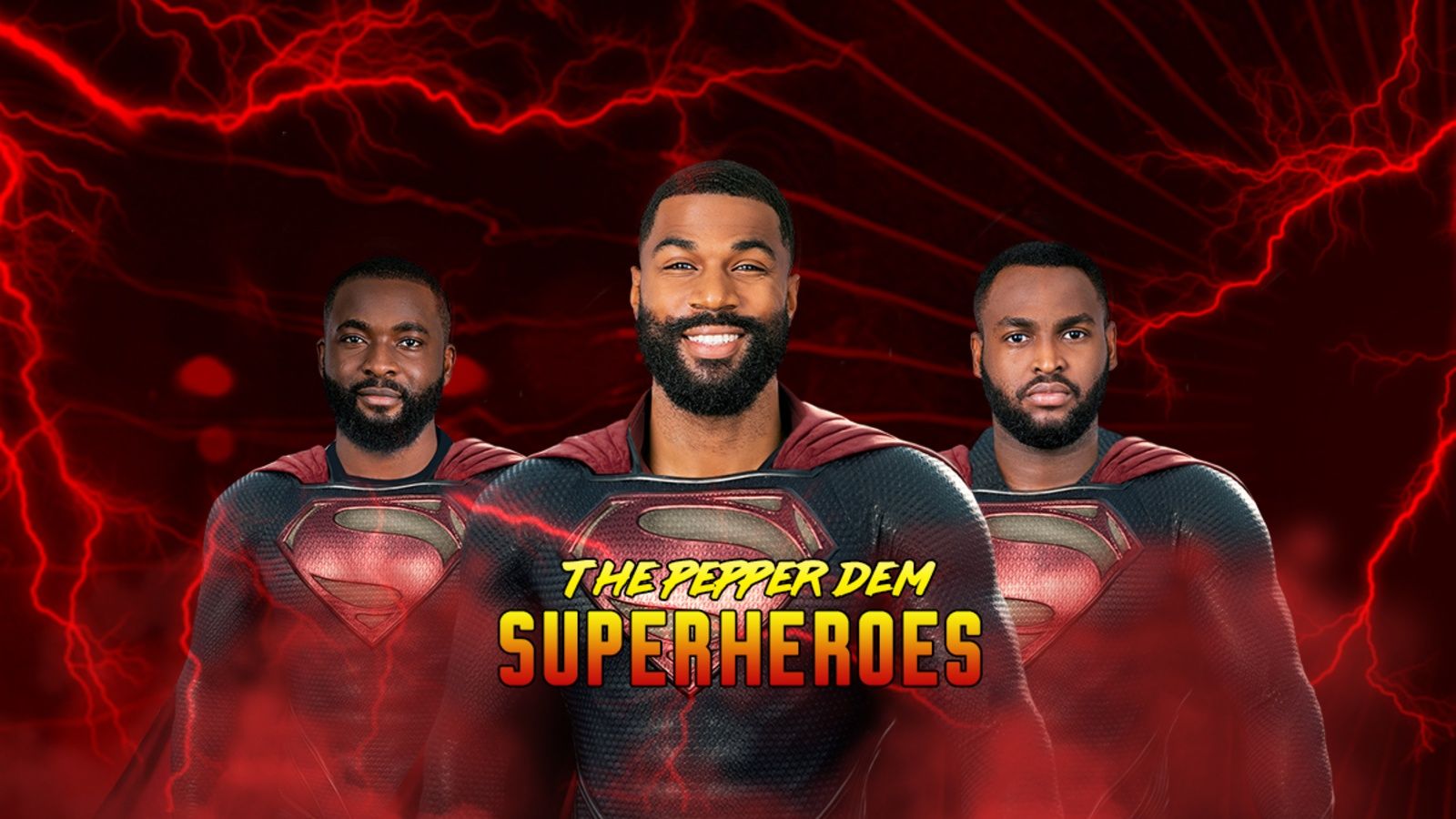 Look out in the garden, it’s a ninja … Nope! it’s just Nelson, Mike and Gedoni coming through with a bottle of Pepsi. Just like Superman, Nelson showed leadership during his time as HoH and Mike seems loved and admired by all (except Tacha). It’s just sad how Nelson hardly comes to the rescue of some of the female Housemates who need a dancing partner during Saturday Night Party and Mike’s altercation with Tacha shows all our Heroes have their flaws. It isn’t hard to figure out what similarity Gedoni shares with Superman. Just like Superman has Lois Lane, Gedoni has Khafi. But one thing we didn’t figure out till now, was how much the man of steel loved having intimate moments. Guess when you have so much steel, you have to put it to work one way or the other.

Ike (Batman)
He might not have the Dark Knight’s stoic demeanour seeing as we’ve watched Ike bawl his eyes out; but he sure loves women the way billionaire playboy, Bruce Wayne does. It might seem like he has set sail with Mercy, but there was a time Ike wanted to dip his hands in every cookie jar. Just ask Ella! If you are a big fan of Batman, you would know he has a strong moral code and Ike, hmmm… If anyone lives by a moral code in the House, it’s not the Coin bandit. On a positive note, Ike did show his high threshold for pain after he got into an accident in the House leaving him with a scar. A scar he carries with pride till date. Batman would be proud.

Jeff’s calm disposition earned him the position of the first Head of House and like Professor Xavier, he exercised restraint in the use of his powers and even showed benevolence by offering to give up some of his coins to Housemates in need. Frodd on his part showed a lot of perseverance in the House. Unfortunately for both of them, for a hero with the ability to read minds, Frodd and Jeff don’t show much capacity in that department. In Frodd’s case, he had difficulty reading Esther’s mind before dropping the bombshell of a romantic proposal that had him in tears shortly after. Jeff ended up selecting only guys as team leaders without reading the minds of the aggrieved female Housemates until Tacha spoke up. Seyi showed exemplary leadership during the preparation for the Wager Task but gave up when it mattered the most leaving the Task to Omashola. A Task they ended up losing.

Omashola (Freakazoid)
We’ve seen Omashola go wacko in the Diary Room and if anyone bears a close semblance to the comical hero in the Pepper Dem House… Yup! You guessed it (not like there was any reason to guess, we did say his name), it’s Omashola. Known for putting up comical antics that might endear him to fans. Like all heroes with flaws, we watched him freak out after his Bet9ja Coins got stolen earning him a Strike.

Sir Dee (Iron Man)
Well, he’s just as good looking as Tony Stark and he knows how to rally the Pepper Dem Gang like Iron Man does the Avengers, but that’s about it. Not much can be said about his similarities with Iron Man.

There you have it! Those are our Pepper Dem Super Heroes. What's your take? Do they fit the role of the Superheroes they claim they'd be if they were one?

News
Analysing the Ships in the House – BBNaija
The triangles, entanglements, flirts, cruisers and the love sprung
News
The Season that was – BBNaija
A Season like no other!
News
Breaking News: Diane Leaves The Pepper Dem House
The race to the final five has been concluded, unfortunately, Diane didn't make the cut.
News
Pepper Dem Gang's Embarrassing Moments
The Pepper Dem Gang prove to us they are human like everyone else and they have embarrassing moments.