Despite winning their “Make Noise” Task on Thursday, several Housemates were back at it this morning, making noise for the rest of them!

Leading the pack in the racket were Jon, Efe, TTT and Kemen. They called themselves the “Phly Band” and played the drums they used during the Task Presentation night, waking up the rest of the Housemates who were still fast asleep.

When Jon was asked on how he came up with the idea of making noise, he said, “The spirit led me and I started beating the drum,” much to the amusement of the Housemates.

While beating on the drums, the quartet waltzed into the bedroom, where Debie-Rise, Ese and TBoss were still tucked in. The visibly annoyed girls wasted no time in letting the guys know that they were not pleased. Debie-Rise even went to the extent of chasing the guys out of the bedroom, carrying a tub of water and an iron rod. 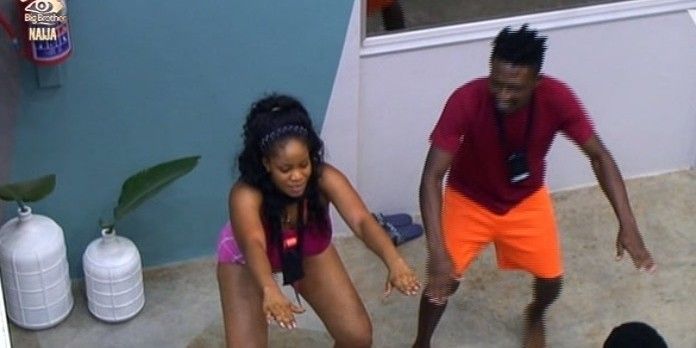 This went on for a while, until HOH Ese and Efe took it to a whole new level. They played a game they called “Do as I do”. Every time Ese said or did something, Efe mimicked her. Ese sang, laughed and screamed and Efe did the same. All the other Housemates sat around the kitchen counter, obviously amused by the two.

This continued for a while, while the other Housemates were busy with preparing breakfast. Remember to watch DStv Channel 198 and GOtv Channel 29 for all the action in the House.

Video
Day 3: Melodies abound in Biggie’s House – BBNaija
Bryann blows a recorder while Christy O accompanies his melody with a drum beat. Both Level 1 and Level 2 Housemate received various musical instruments as part of their preparation for the Wager Task.
Video
Day 15: Week two in the Level Up House – BBNaija
Ships grew, strikes were issued, and the gist was shared. Week two in Biggie's House has not been without any entertainment as Housemates do all they can to stay in the House till the final day.
Video
Day 31: Sammie's loneliness disturbs Peace – BBNaija
Sammie jokingly talks about his loneliness and ends up offending Peace in the process. Maybe flirting with his chest is just not what Peace needed after all. For the full gist, stream BBNaija now on Showmax!
News
Live Show 3 – 31 Jul: Two Fake Housemates Level things Up – BBNaija
Then there were 26, not! Big Brother threw a spanner in the wheels tonight by introducing two fake Housemates; Deji in Level 1 and Modella in Level 2 to shake things up in the Level Up House.