Here’s What Made The Pepper Dem Gang Cry And Cringe

News
12 September 2019
What a Season it has been! Let’s take a trip down short-term memory lane and revisit the Pepper Dem Gang’s low moments in the House.
Get DStv PREMIUM

Love betrayal is the worst thing that can happen to anyone. Wrong! Have you ever felt betrayed by people you sacrificed yourself for? Well, let Seyi tell you.

Remember when he refused to use his Veto Power and decided to be the sacrificial lamb instead? Well, after being fake Evicted, the resident sugar daddy saw beneath the fake hugs and sad looks from the Housemates. How did they not even miss him the second he walked through those doors? This thought left Seyi down for days and even upon his arrival back into the House, he kept to himself for a while. “They’ll see a different Seyi this time,” he told Tacha while he expressed his hurt. 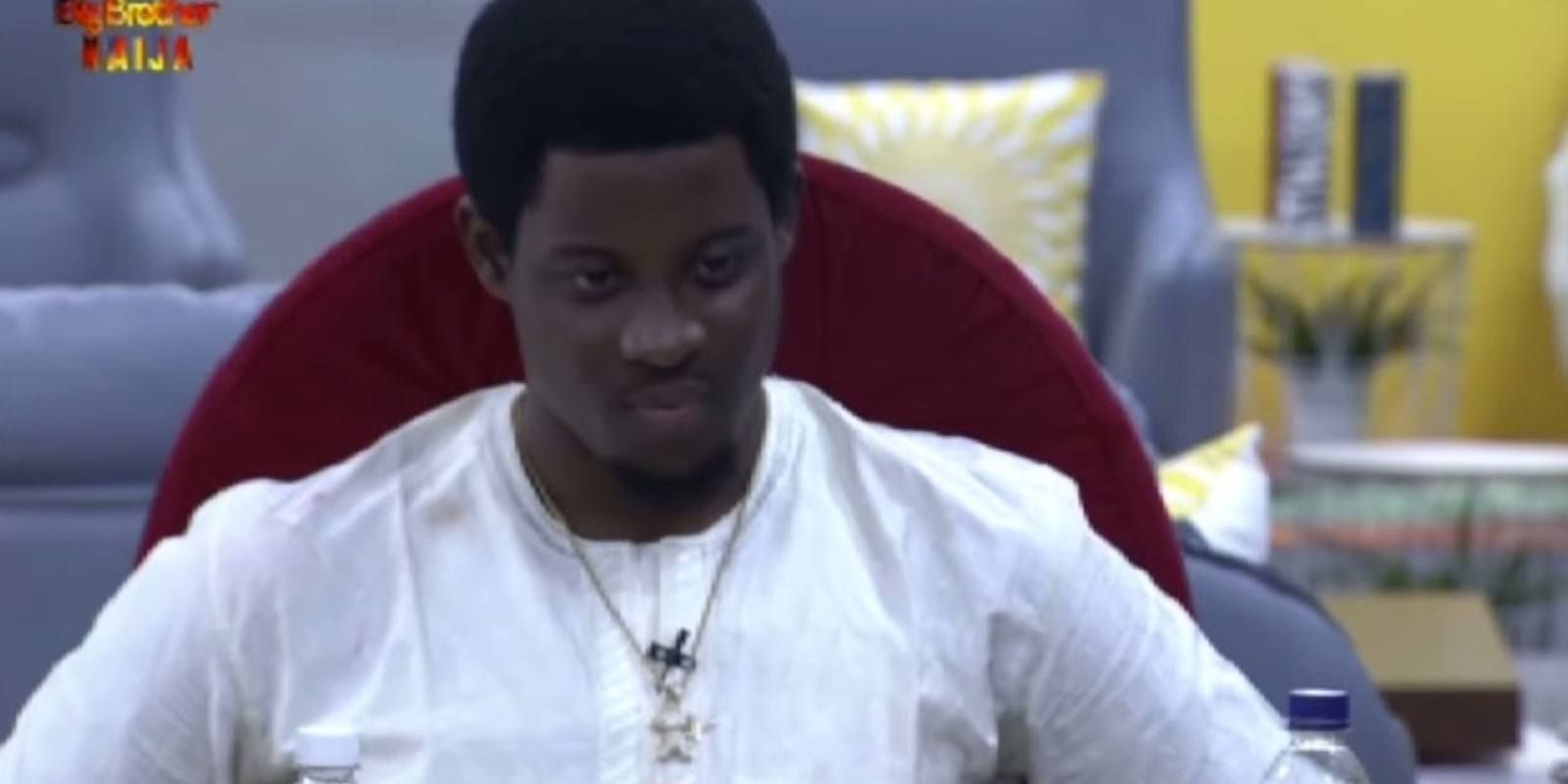 How do you handle hard conversations without crying?

According to Mercy, sometimes you have feelings and when they come up, you’re allowed to feel them…

Mercy has certainly come a long way in the House; from the Coins robbery to her gangsta relationship with Ike, we can’t deny that she’s her own boss. Imagine our surprise when she broke down in the Diary Room.

Like others who have expressed their emotions when hit by low times or memories, Mercy did not fail to let tears out as she talked about her mother’s sacrifices for her. Don’t worry Mercy, mama must be so proud of you.

Another Strike For Ike

The fear of one Strike is the beginning of wisdom. What happens when you get two Strikes from Biggie?

Ike did not only have a gloomy face after Big Brother announced his second Strike, but his face was also blue all through the week of the announcement. In fact, the second Strike has birthed a new Ike in the Pepper Dem House and one can’t help but wonder where the gangsta Ike went to. 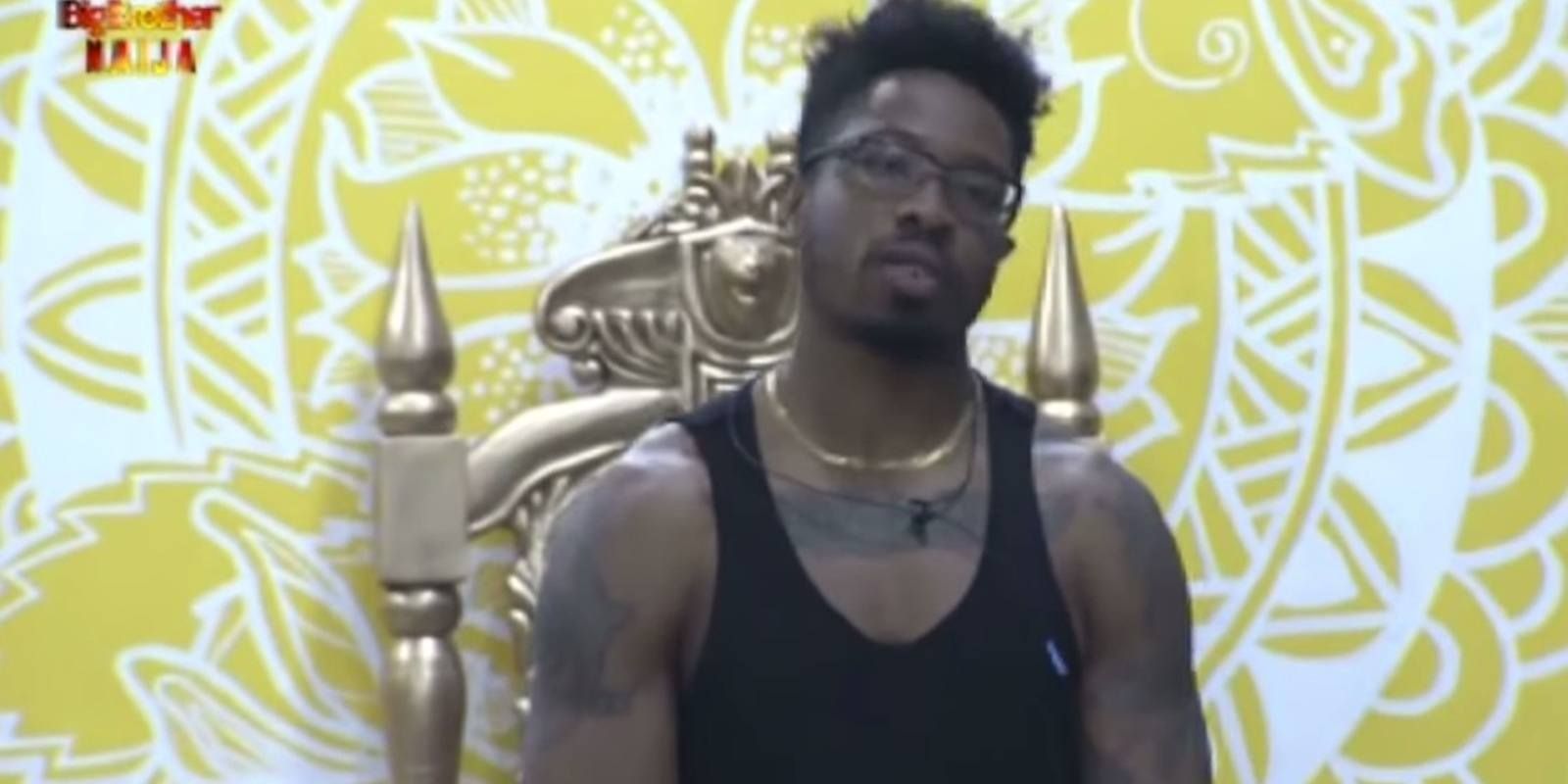 Nothing hurts more than getting excited to meet people and getting a cold reception from them. Ask Cindy.

We can’t easily forget how elated she was when she got into the House as the last addition to the Pepper Dem Gang. Unfortunately, the Housemates were not having it as they had gotten enough of Biggie’s dose of twists. With five new Housemates being added to the game, fighting for the same prize, who would blame them?

Amidst the unaccommodating faces in the Pepper Dem mix, Khafi was the only one cheerful enough to receive Cindy and we didn’t miss how disappointed and worried she looked.

Well, hey! She’s grown to be loved in the House and we’re so here for this. 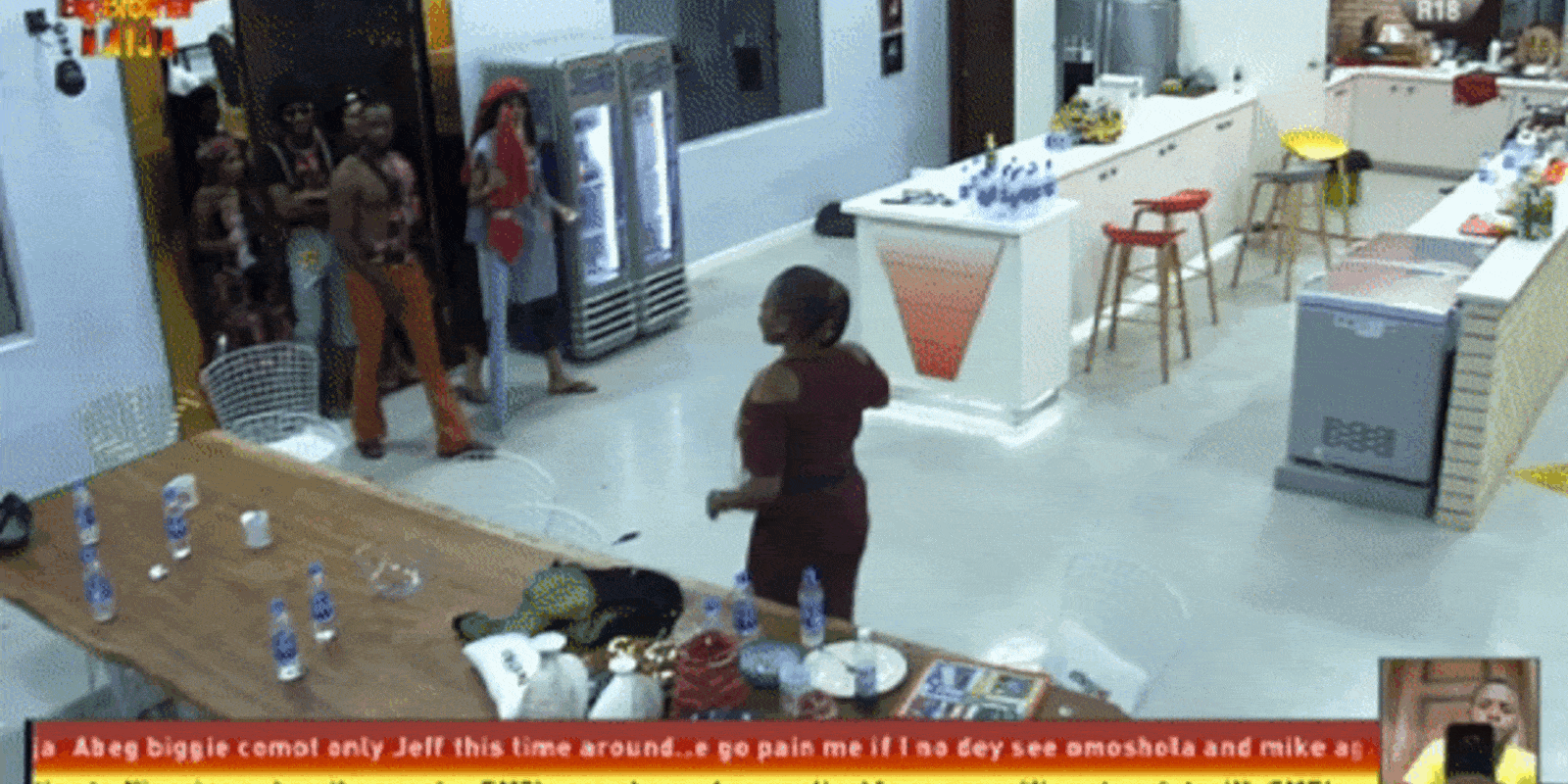 Do unto others what you want them to do to you. You’re familiar with this saying, right? Well, Elozonam practised something similar to this and he did unto a Housemate what she did to him.

In other news, Diane didn’t use her VPH title to Save Elozonam when she had the opportunity to and in return of her favour, he did same. By Saving Venita while Diane needed saving, Elozonam fell into Diane’s betrayal web.

“…But she didn’t Save him too, tit for tat,” you would say but for some reason, Elozonam was enveloped with guilt after he made his VPH decision. While we saw it as an eye for an eye, he saw it as a disloyal move to his resident love interest and spent the night in a miserable mood. 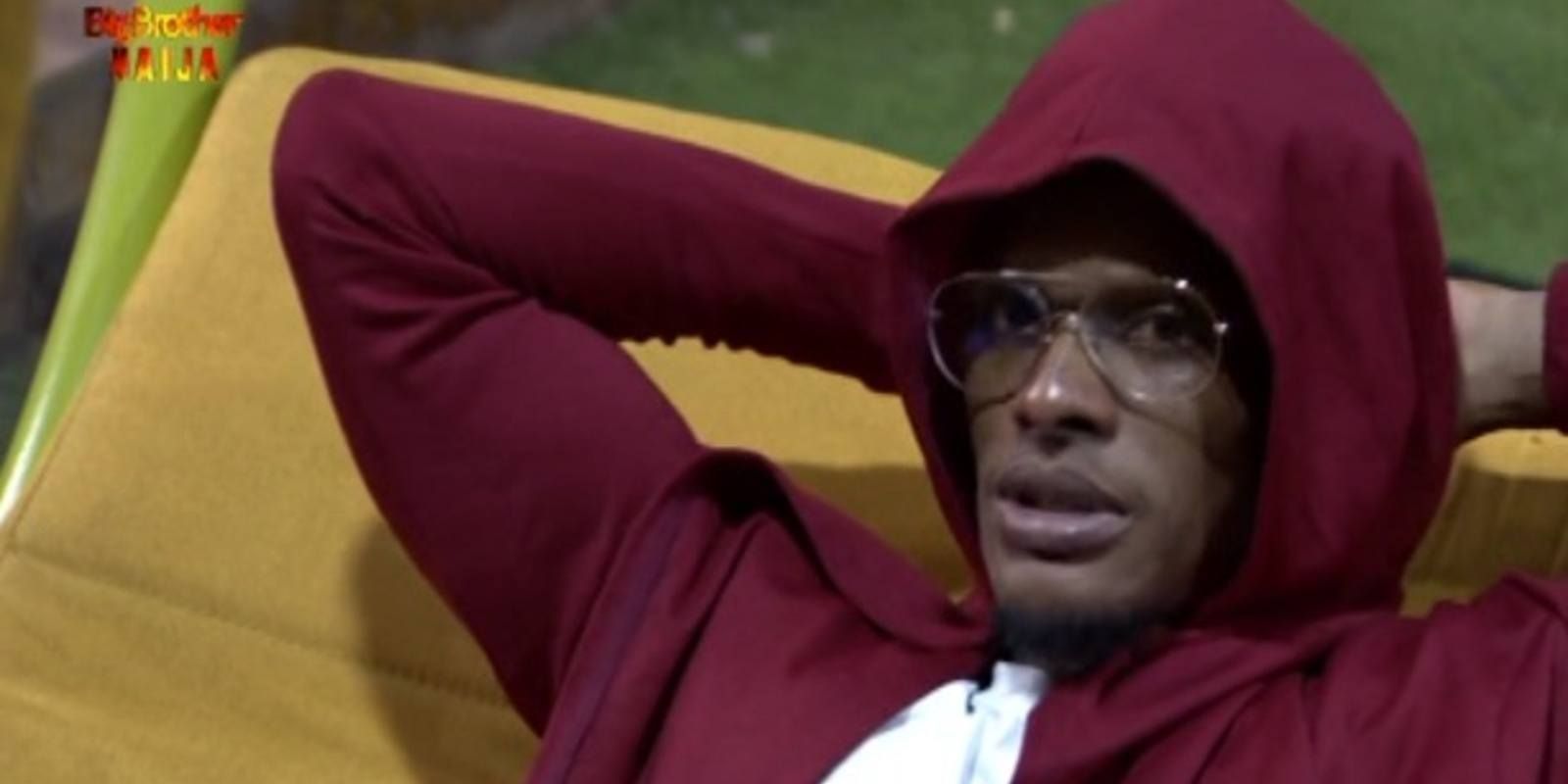 Her first Strike might not have moved her that much but the moment Biggie announced her second Strike, we could see her face drop underneath those sunglasses.

For the first time in the House, Tacha openly voiced out how hurt and scared she was about her punishment from Biggie. She further went to apologize to Big Brother for disregarding the House rules. 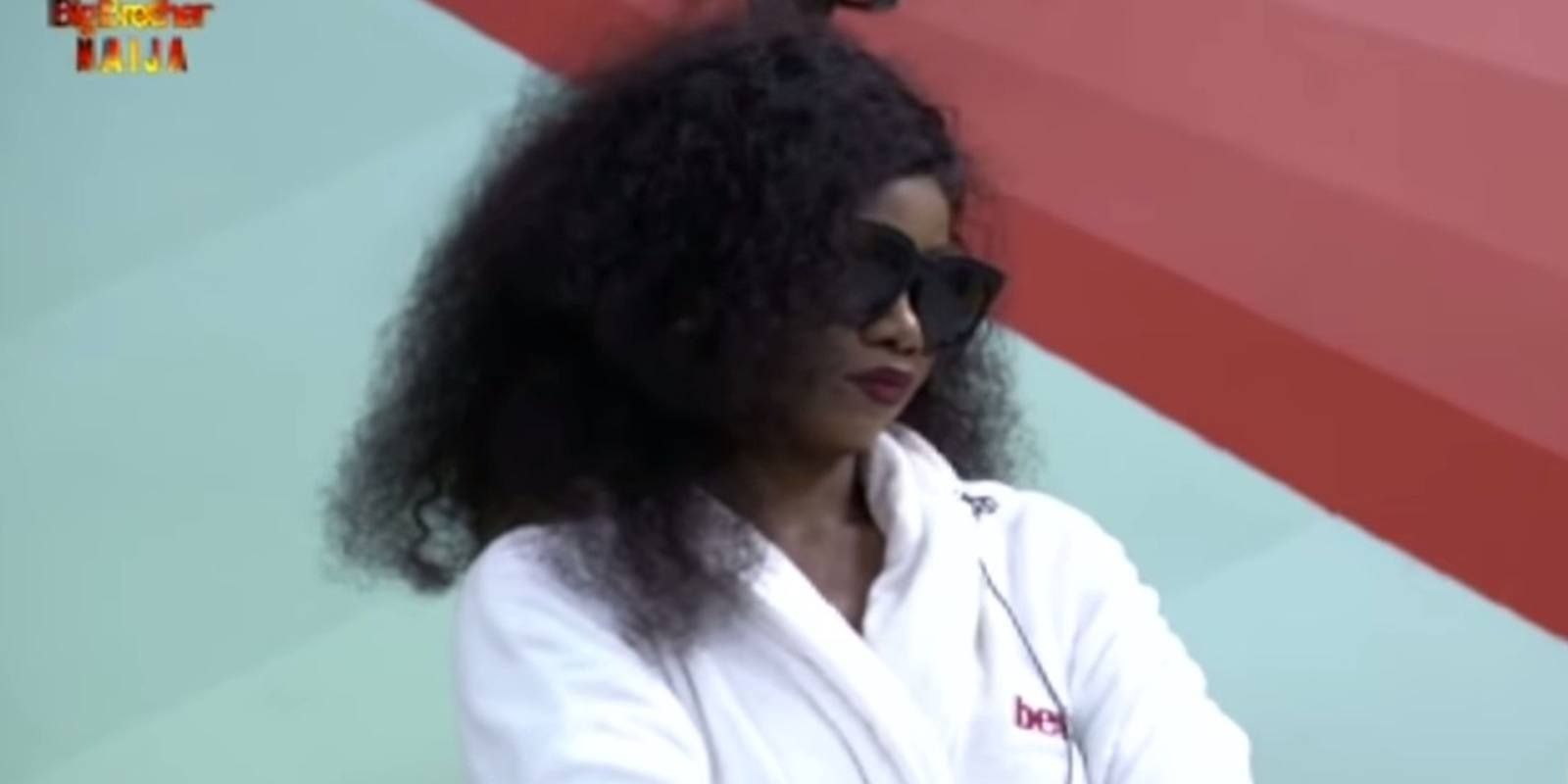 We got screams, curses, tears and more screams from Omashola when his Coins were stolen by (you know who).

The resident Warri blood did not fail to let the other Housemates know that he’s not to be played with, in the House. “I no dey okay o,” he kept shouting as he paced around angrily.

Of course, asides crying over his ex, this is the lowest we’ve seen Omashola in the House. 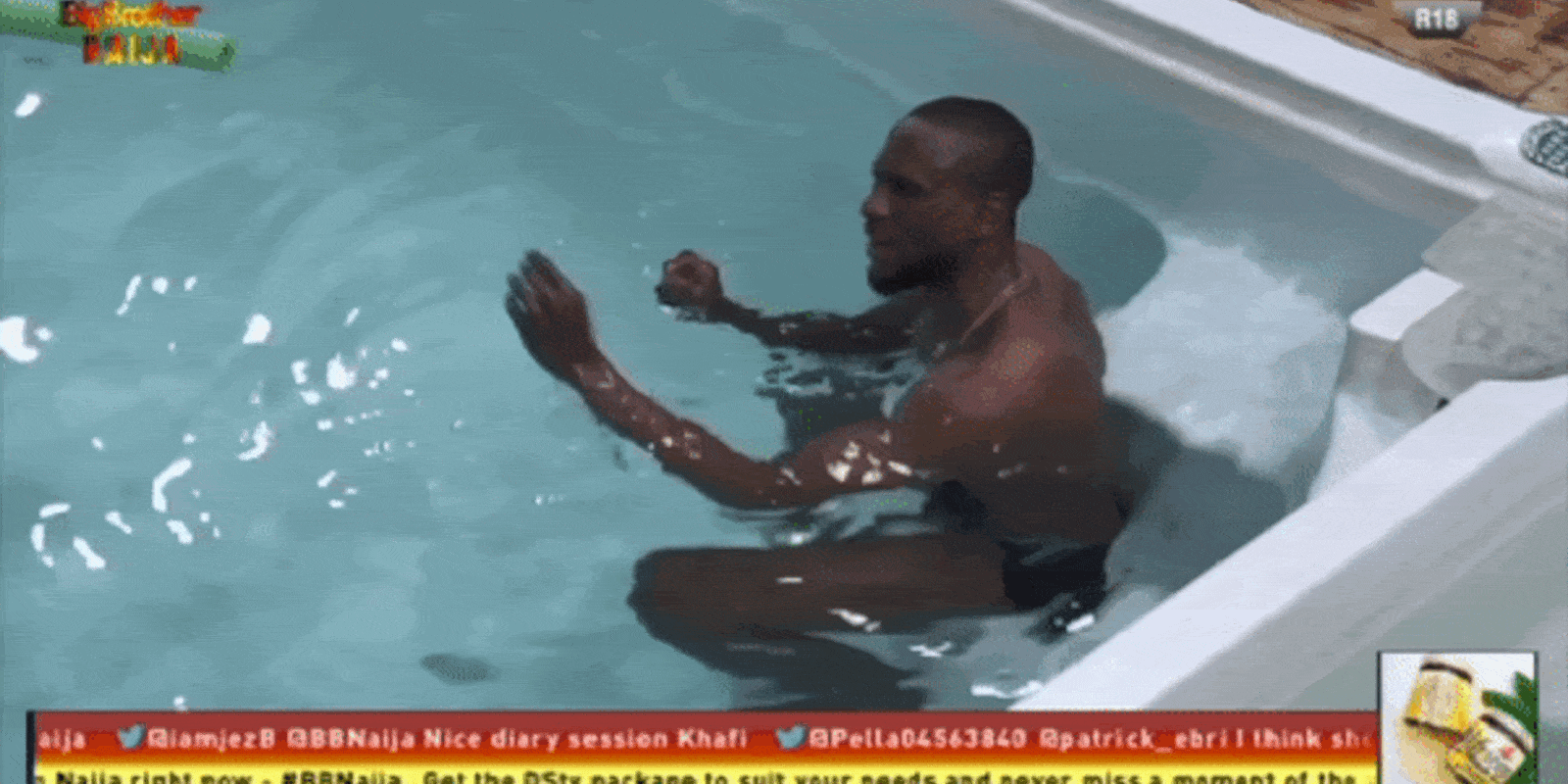 For her to have likened the situation to losing a lover to death, we reckon Khafi had a hard time with Gedoni’s Eviction from the House.

Oh, the waterworks and the sniffing of her lover’s hat was all we got from Khafi in the first two days after the gloomy exit.

Gracefully, her high spirits bounced her back into the happy Khafi we all know. Since then, the resident detective has been celebrating wins in the House. Talk about rebirth! 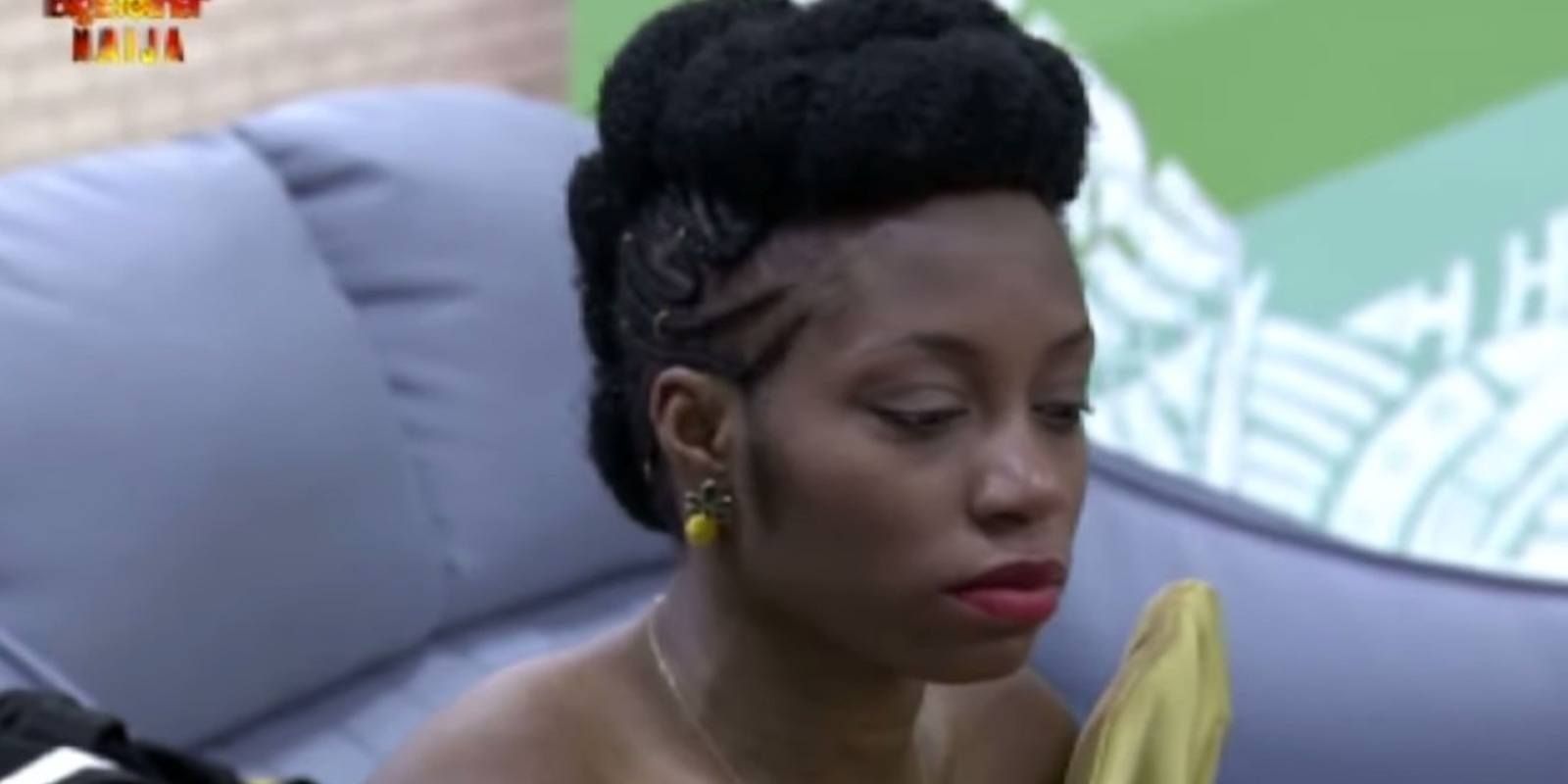 Again, another Evicted lover brought about tears in Biggie’s House.

“Esther, you’ve been Evicted from the BB Naija House.” Undeniably, this was one of Frodd’s saddest moments, well asides the time he had a hard time getting Esther’s love.

Even though he was also at risk of getting Evicted that night too, Frodd seemed like he could care less about anything else around him.

“They should get ready to see a new Frodd,” he said to Ebuka after Esther’s Eviction and upon finding out that the Housemates had a problem with his attitude.

Imagine the joy when Esther willed all her Coins to him. Love is still in the air, perhaps? 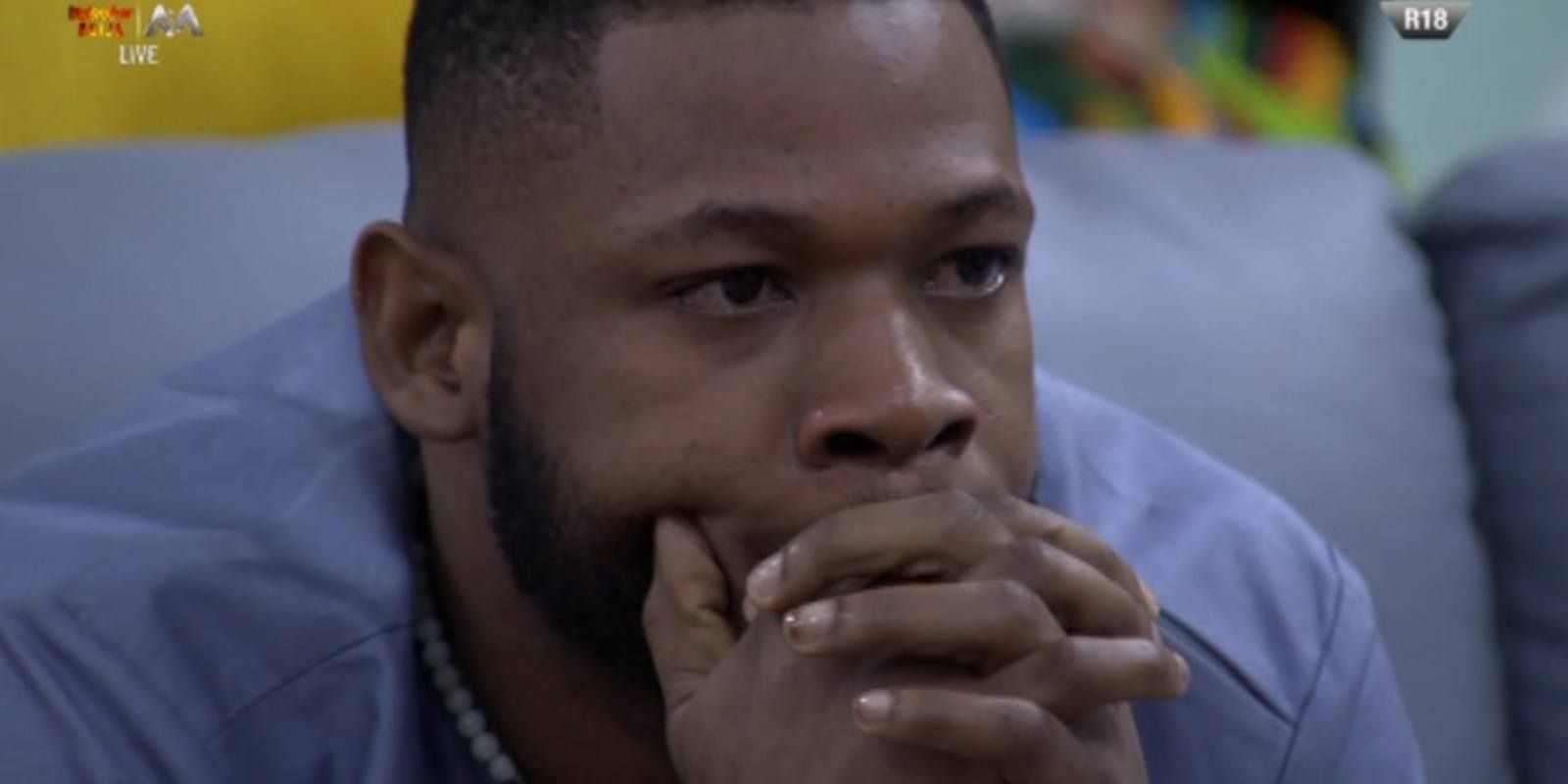 Asides the time Sir Dee and Tuoyo left the House, we can’t easily forget how low-spirited Diane was when her team lost the Dano Arla Task.

Understandably, she was expecting a big win in this challenge as she keeps telling everyone about her great cooking skills. Imagine the unhappiness that clouded her face when she wasn’t announced as the winner of the Task.

To express her sadness, she spent the night in the Garden talking about how hurt she was about her loss. Better luck next time, Diane!

Mike Without The Cruise

What’s the Pepper Dem House without cruise? Well, the president of the cruise association was seen without the cruise juice when team Cruisetopia lost their Wager Task.

For that moment, the House felt dull and even our screens felt it. Trust the cruise lord to come out of the dull mood within a matter of minutes and he did not fail us on that. 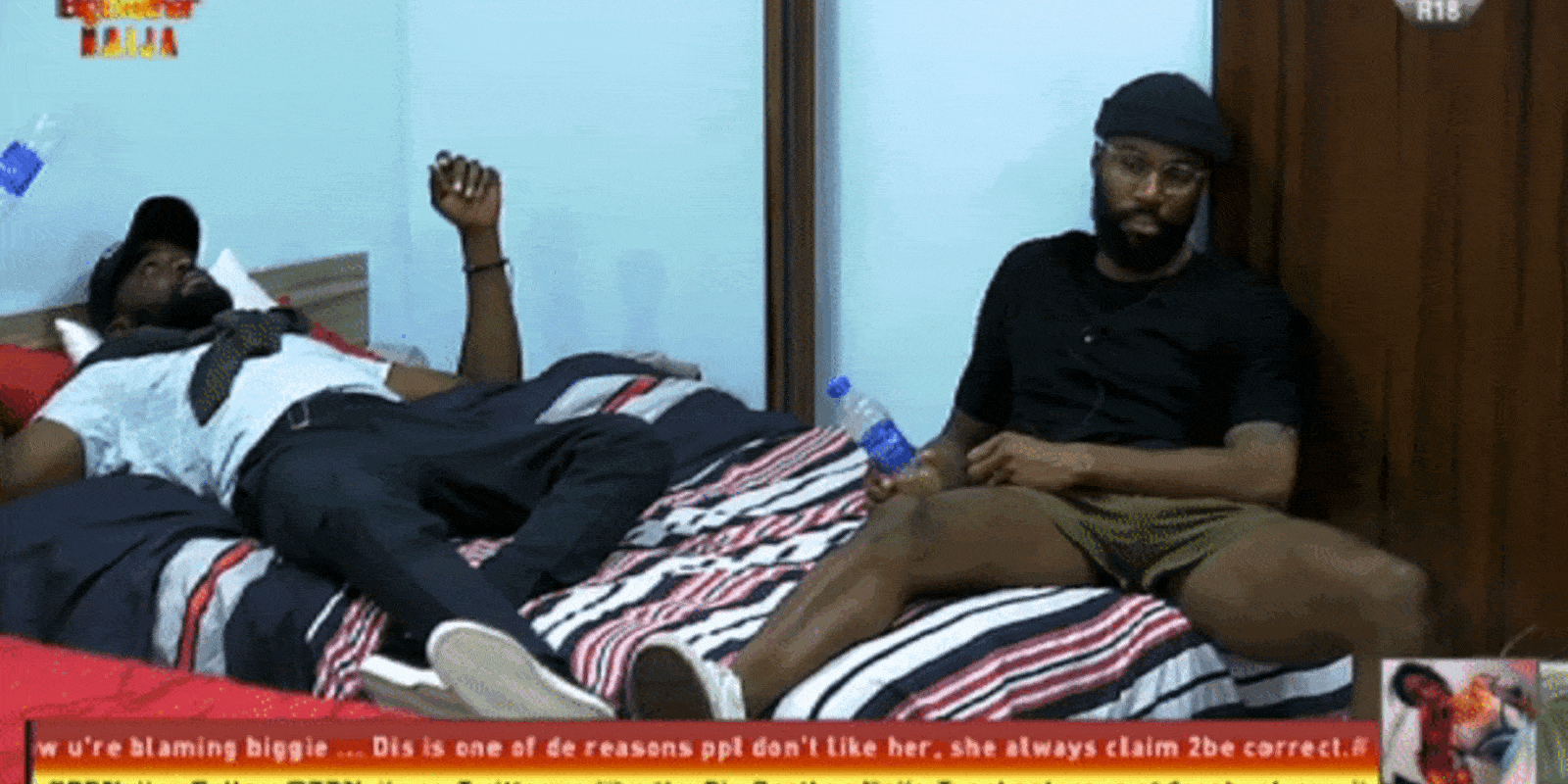 Turns out like everyone else, the Pepper Dem Gang have also experienced low times in the House. What we love about them is how fast they get out of those moments and get up to high spirits as they continue the game.

Video
Live Show 8 – 5 Sep: Boma’s Big Brother journey – BBNaija
Boma made quite an impression on fans and his fellow Housemates with the amount of work he has done as an actor and never let us forget he was a street kid from Yaba who hustled his way to the top. The one and only Okra slipped in and out of quite a few situationships with Angel, Queen and Tega. Here’s a look at some of his highlights in the House.
Video
Live Show 8 – 5 Sep: Peace’s Big Brother journey – BBNaija
Peace made a mark this season as the first Head of House in Biggie’s House. She was also skilled at bonding with people and made her mark as a part of the Power Puff Girls alongside Arin and Nini. Here’s a look at some of her Highlights in the House.
News
The Pepper Dem Gang's Moments Of Excitement
Check out the times the Pepper Dem Gang were super excited in the Big Brother Naija House.
News
The Pepper Dem Gang as Animals in a Fable
We can imagine how interesting it will be if the Pepper Dem gang were fable characters.