Day 73: Not getting along after all

News
06 April 2017
The Housemates have been raving about how happy, close and care-free they are lately but all that came to an end.
Subscribe to Watch

The day got off to a great start with Biggie asking Debie-Rise to use her discretion to pick a successor. She went with Marvis siting the fact that it was her father's birthday as the reason for choosing her. "I wanted her to be king with her king!" She later said in her Diary Session. Next, the Housemates took turns rolling dice, one with the Housemates' name on each side and another with random questions that they'd have to answer.

The questions ranged from "Tell us your worst moment as an adult?" to "Confess to something you've never told anyone", leading to some shocking revelations such as betrayal, bed wetting and even loss of loved ones. In the process the Housemates seem to have learnt quite a few things about each other that they still hadn't come to know after all these weeks.

After the game was done the siren sounded and the Housemates went rushing back inside. Today (Day 73), TBoss took charge as the curator for the museum tour, donning the security outfit as had done Marvis yesterday. This time around, there was no crying or batton swinging but she still dealt with her fair share of annoyances from her fellow Housemates who were fully in character and wrecking havoc. Chief among them was Debie-Rise who was belching and farting non-stop throughout the presentation. Bisola seemed quite annoyed with her and confronted her for disrupting things. Debie-Rise was quick to retort and suggest Bisola did the same thing with her spolit child character yesterday (Day 72). Have a look and let us know if you agree. 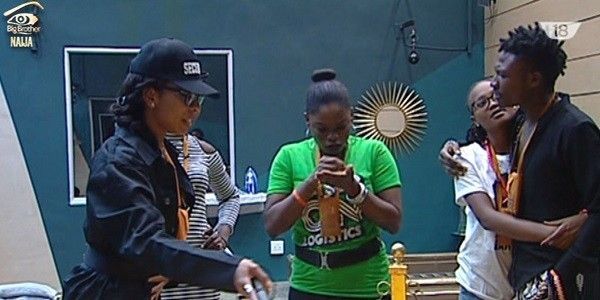 Biggie then brought back a familiar favourite, Truth or Dare. This time around there was no booze in sight and anyone who refused to comply with a request had to drink a whole bottle of water. Biggie then threw in 72 bottles of water to make sure there were no cop outs. Things went well initially with people trading stories about their fantasies and spicy escapades but things took a bad turn when Debie-Rise asked TBoss to recite the Nigerian national anthem, something she failed to do in the moment. TBoss took this an attempt to throw her under the bus during the most critical week of the show while Debie-Rise insisted it was an innocent dare. Bisola tried to reconcile them to no avail. 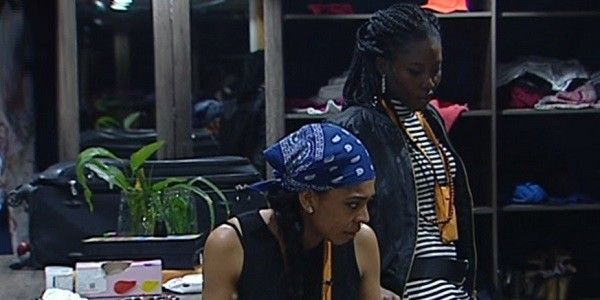 After a protracted exhange of words TBoss elected to walk away saying she was too angry to talk. Debie-Rise on the other hand voiced how hurt she was at being accused of something so malicious but still elected to apologise and swore to never bring up the issue again. TBoss then went to bed early and soon everyone followed suit though Marvis and Efe sat up chatting till late, completely unphased by the drama that had just unfolded in the dressing room. In fact, Efe simply got up and walked away when the fight began. Have a look at that moment below and tell us what you would have done. All things considered, it looks like the honeymoon is over and the pressure is mounting once again.

Video
Day 11: Spicy bedtime moments – BBNaija
Bedtime in the Level 2 House was all sort of spicy, Ilebaye getting a massage from Bryann and Daniella having an intimate moment with Khallid was definitely an entertaining way to end the day.
Video
Day 9: Timing and speed at the HoH Game – BBNaija
Housemates gathered in the Arena yet again to go head-to-head for the title of Head of House. As the incumbent HoH, Eloswag was not allowed to play, along with the new Housemates, Deji and Modella. As their first Game, Housemates had to set the watches provided to them to 4pm. The top three contenders were Dotun, Hermes and Cyph, but only one reigned supreme.
Video
Day 73: Wrap Up - "You Are All Winners" Biggie
Those words have a way of lifting the Pepper Dem Housemates mood and after a long day, that was all they really needed to end the day on a great note.
Video
Day 73: A Game Of Truth
If you didn't know the Pepper Dem Gang well enough, watch this video to see them reveal staggering stuffs about themselves.