News
31 March 2017
The Housemates spent much of the day outside and had to beg Biggie to let them back in. Did he?
Subscribe to Watch

Biggie gave the Housemates just 45 seconds to vacate the House with whatever they could carry and he left them in the garden for the day and the night. The only way they could get into the House was for brief bathroom breaks. This got the housemates bonding more and chatting.

Biggie then got the Housemates to go into the Arena where they found paintball equipment and were worried that it was going to be a painful day, in keeping with the Extreme Survivor Week theme. It turned out that they wouldn't be shooting each other, proabably much to the regret of one or two, but that they were aiming at targets. The prize was the opportunity to win one of their bags back. Efe won the first round but because nobody else hit the bullseye, Biggie gave them a second round in which TBoss and Bally managed to get 100 points each. Eventually Bally emerged the victor with 400 points in total. 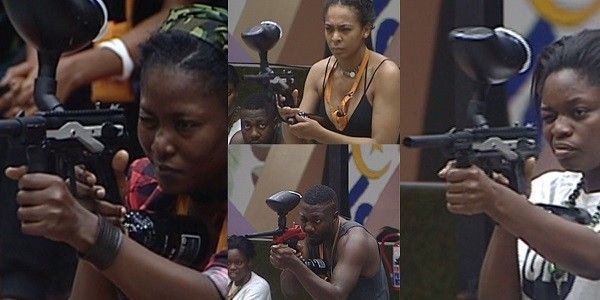 The Housemates, split into their two divides, "the clique" or the "fantastic four" against TBoss and BFF, Debie-Rise. They did their best to campaign for Votes whilst doing everything they could to bring down their fellow Housemates and get the public not to Vote for them. TBoss and Debie-Rise took a lot of flack from the "fantastic four" but they gave as good as they got. The usual words "manipulative," "victim," "fool" etc were all bandied around. No love lost there. Meanwhile, Bilsola draped herself all over Efe and Bally, the girl's got needs.

The Housemates all admitted that being in the garden all day wasn't as bad as they had all initially thought it would be. The permission to conspire in the House had made existing divisions a lot more visible, however, spending time outside allowed them to bond. Bisola revealed in her Diary Session that she wanted them to win enough points to get the save and replace reward, but, TBoss and Debie-Rise, she surmised has sabotaged the missions. Had they been successful, she'd have saved Marvis. Bisola did show some schadenfreude when she admitted that she regretted prejudging TBoss in the beginning.

The Housemates then had their final Task Presentation, watch the video below:

Biggie suggested that the Housemates spend the night underneath the stars. The final Task Presentation was set in the Arena and the Housemates each had to present a three minute speech as to why Biggie should let them back into the House. TBoss sited mosquitoes. Biggie found their speaches a bit shallow and said "the House may, or may not be open."

Eventually, after the Housemates had given up on a night spent indoors, they settled in for bed which was when Biggie said "The house is now open" much to their relief. However, Biggie did leave them some big notes on the ovens saying "Do not touch" so if they were to get hungry, they would have to be creative. Fortunately, they had frozen food in the fridge and were allowed to use the microwave.

It has been a gruelling week with the Housemates being put through their paces to earn the big prize. Who will be the last man or woman standing next week Sunday as this exciting season of BBNaija comes to a close. Who do you think is going to be the winner and why? Let us know what you think below.

Video
Eight events for 8th Edition – AMVCA 8
The Eight Edition of the Africa Magic Viewers’ Choice is going big with an eight-day plan lineup. Starting on 7 May 2022, the AMVCAs will host an Opening Night Gala, Runway Show, Young Filmmakers’ Day, Content Market Workshop, digital Content Creators’ Brunch, A Celebration of Africa’s Diversity; followed by the Nominees Gala, and lastly the BIG DAY, Awards Night on 14 May. The Eighth Edition of the AMVCAs is brought to you by Africa Magic in association with Multichoice and proudly sponsored by Amstel Malta.
Video
Strip question game – Comedy Nites
Back-to-back rib-cracking jokes and a fun game of strip questions make Comedy Nites a fun night.
News
Day 67: Cross dubs Angel the King of cruise – BBNaija
The House has had a lot of cruise and people claiming to be cruisers, but none seems to have the hang of it like Angel.
News
Day 67: The tales of failed love interests in Biggie’s House – BBNaija
While a few ships blossomed, we’ve witnessed some epic fails that came up either because Housemates did not take a chance on love, or they were just not that into it.