News
30 March 2017
The Housemates have been living without any luxuries all week. Now Biggie gave them a chance to get their goodies back.
Subscribe to Watch

The look on the Housemates faces when they walked into the Arena was priceless. It's Extreme Survivor week and so far Biggie has really put them through the most. Paint guns were strewn on a large table so we can only imagine what kind of pain they thought was in store considering yesterday's happenings. Biggie soon put their worries to rest pointing out that this time they'd be shooting at targets and not each other. Smaller targets carried more points than the larger ones as they were harder to hit. The reward for winning was an opportunity to get one of their bags back. 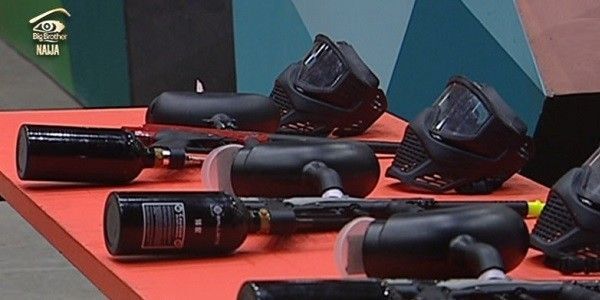 Big Brother dictated the running order with TBoss kicking things off. However she didn't seem to have much luck. She missed every single target and also argued that her paint gun was faulty and only fired five out of the eight times she was afforded. Bally and Bisola had better luck when they followed up her effort but they were only able to graze the smaller and more valuable targets. The trend followed this pattern and by the end of the first round, Efe was the only one who'd managed to hit the bulls eye and score 100 points! 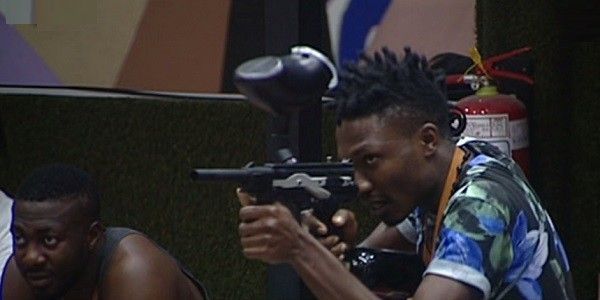 Feeling generous and a little sorry for our Housemates, Biggie elected to give them another round. It proved to be a worthwhile gesture because the Housemates had much better luck with Bally and TBoss managing to hit the 100 point target and tie with Efe for the lead.. Naturally there had to be a tie breaker and in the end Bally had the best round hitting a whopping, three, 100 point targets while Efe and TBoss missed all their shots. Biggie declared Bally the winner with 400 points scored!

Being relegated to the yard has forced the Housemates to start talking again as there are no opposite ends of the House to go to. Do you feel that the gruelling Task will heal the rift in the House? Lets us know after the jump but first, have a look at the Housemates in action.

Video
How well do you know your Pidgin English? – AMVCA 8
Hollywood royals Tasha and Sidra Smith, Bayo Akinfemi, Brandon Micheal Hall and Grant Housley take a shot at Pidgin English, will they get it right?
Video
Shot shot down – Shoot Your Shot
Sam may have set the mood right and taken what he thought was the perfect shot but he was way off the target. His crush was already in a committed relationship.
News
Day 67: Cross dubs Angel the King of cruise – BBNaija
The House has had a lot of cruise and people claiming to be cruisers, but none seems to have the hang of it like Angel.
Video
Day 67: The eery gist – BBNaija
While the Housemates were gisting in the garden about different cultures and traditions – the conversation turned eery as they spoke about corpses and death.