News
28 March 2017
There was talk about possible activities during the week leading to the season finale.
Subscribe to Watch

Bally, Bisola and Efe sat in the dressing room discussing the week leading to the season finale. 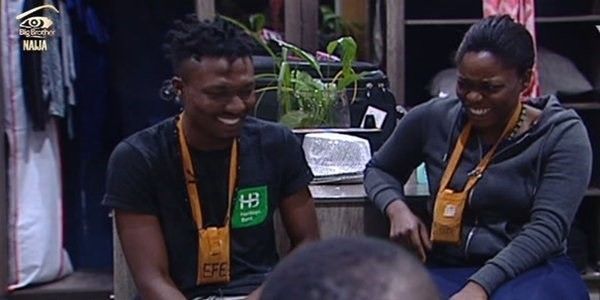 It’s about two weeks till the finale and we know for sure that HoH Bisola and Efe, who she saved during the Live Nomination Show yesterday, are guaranteed a stop in the finale. The other Housemates, Bally, Debei-Rise, Marvis and TBoss are up for possible Eviction.

The season finale ‘talks’ have been on some of the Housemates’ mouths for some time and Marvis and Efe had the same conversation after the Saturday Night Party a just a few weeks ago, naming themselves and two other Housemates as possible finalists.

The trio first reminisced about some of the escapades they’ve had with a few Ex-Housemates, ThinTallTony in particular. Bisola would laugh, as Bally reminded her of some of the things that happened between her and ThinTallTony. They also talked about how some of the Housemates had a tough time getting comfortable in the House.

Efe then steered the conversation to the season finale. “Next week we’re campaigning for Votes,” he said with certainty. Bally and Bisola seemed to agree with his assumption. “It’s down to only two guys and four girls,” added Bally.

He also mentioned how he’d learnt a lot from the Big Brother experience. “You’re not the same when you leave here. This place is a training field,” he said. Efe agreed, saying he had learnt tolerance.

The remaining Housemates have come a long way, having survived weeks on end with challenging Tasks. This week is Extreme Survivor Week and Biggie had them doing all sorts of Tasks to test their endurance.

Video
Tying loose ends – Venge
Timi confronts Kamara over the death of Angela, while Williams silences Aunty Belema once and for all.
Video
The night ends off on a high note after a performance by D’Banj – AMVCA 8
D’Banj wraps up the eighth edition of the Africa Magic Viewers Choice Awards with a final performance!
Video
Day 65: “No Male Bestie For My Girlfriend” Omashola
Omashola, Seyi, Cindy, Venita, Diane and Elozonam shared how they feel about their partners having best friends of the opposite sex. Watch what they thought here.
Video
Day 65: On Nomination And Eviction Reactions
Cindy expresses her joy on not being on the Nomination list and Tacha get teased by Omashola and Seyi for her different facial expressions on Eviction nights.