It’s moments away from tonight’s Live Nomination Show and there’s an unsettling mood in the House.

The Housemates sat in two camps in the late afternoon, with Debie-Rise and TBoss in the lounge and Bally, Bisola, Efe and Marvis outside and each camp talked about the other.

Debie-Rise and TBoss talked discussed who they felt was the strongest competitors in the House, as well as predicted who would Nominate who tonight. Nothing strange there, as Biggie introduced a game changer last night, saying they could discuss Nominations. 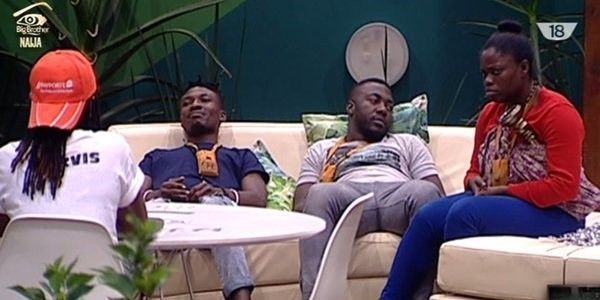 TBoss and Debie-Rise have been discussing how there’s a “clique” in the House for a while now, that of Bisola, Marvis, Efe and most recently, Bally and it came as no surprise that they sat and discussed these particular Housemates this afternoon.

The conversation quickly moved to a slight hint of depression, as TBoss told Debie-Rise how she was disappointed in herself lately.

“I feel I have disappointed a lot of people. I’m angry,” she said, before bursting into tears.

Debie-Rise tried her best to comfort her. Meanwhile, in the other camp, Bally, Bisola, Efe and Marvis sat outside discussing the fact that TBoss was crying.

Such conversations were not the first today, as Bally, Bisola, Efe and Marvis got together this morning and started discussing openly, which one of them they felt should take the fall tonight.

Biggie’s twist seems to have certainly shaken things up and with Bisola winning Head of House this afternoon, one wonders how things will play out during the Nominations.

Video
Who blocked who? – BBNaija
Whitemoney and Queen explain the miscommunication that prevented them from shipping after leaving Biggie’s House.
Video
Samson gets the last laugh – MSI
Samson started his meal sober while his brother gloated, but in a twist of fate, he ended up having the last laugh.
News
Day 66: Biggie's season 5 twists
Biggie has been keeping the Housemate’s on their toes all season long. Here are a few of the moves that he made that had the Housemates shaken and viewers glued to the screen.
News
Day 39: Yousef has got Angel twisted up– BBNaija
"Hi my name is Yousef and I have just being pranked." These were not the words Yousef could say after he thought Angel put him to the test.