News
26 March 2017
The Housemates had a light-hearted Task today and ended it off with a party.
Subscribe to Watch

The colour white dominated much of the days’ activities. From the Task inspired by Close Up toothpaste, to the all-white Legend Saturday Night Party.

For the Close Up Task, the Housemates had to play an alphabet game in teams. The Ultimate HoH Efe randomly selected an alphabet between A and Z and each team had to act out a word beginning with the selected alphabet. At the end of 12 rounds, Team B, consisting of Bisola, Bally and Debie-Rise won.

It was them time for lunch after the Task and while they were busy preparing it, Biggie announced that the Store Room was opened and they proceeded to get their all white outfits for the party with DJ Lambo.

Decorating the Party Room has become the norm and it came as no surprise that they had to decorate it, before relaxing in the jacuzzi afterwards. A few hours later, it was party time! 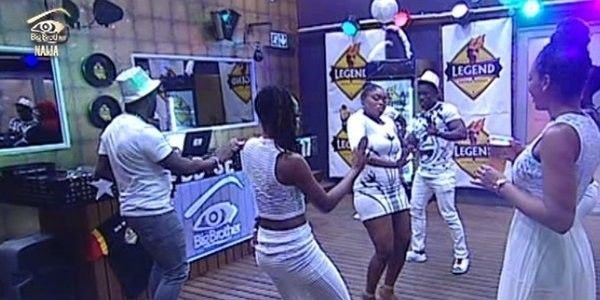 TBoss joked around with the other Housemates while getting ready for the party, inviting Biggie to join them for the party and it was not long before they heard DJ Lambo dropping bombs in the Party Room. They hurried inside, greeting the deejay and taking over the dance floor.

The party moved back into the House, after Biggie’s Ninjas ushered them back into the House and they were excited to find a bottle of Jameson waiting for them. It was shared among them and they continued chatting in groups of twos or threes. Efe got into a slight exchange of words with TBoss because she had cooked the chicken with a bit of sugar before he decided to make it an early night and went to bed.

Bally cosied up to Bisola in bed for a while as he tried to convince her to spend the night in bed with him, and for a while it seemed the "ultimate kisser" would have his way but Bisola had other ideas as she felt being on the radio show with Bassey and Debie-Rise would be more fun. BBNaija 19.8FM broadcasted live until the wee hours of the morning with show hosts discussing an array of topics. It was about 4am when Bassey, Debie-Rise, Bisola, Bally and TBoss finally shut down the show and called it a night; or should we say morning.

It is Live Evictions Show today and the kick off time is 7pm WAT; hopefully you have Voted enough times for your favorite Housemates to ensure that they see another week in the Big Brother Naija House? We do hope so, so tune in at 7pm WAT for another epic sunday evening on the BBNaija Live Stage.

Video
What does being a father mean? - AM Exclusive
Edward Pam Fom, Whochey Nnadi, Ibrahim Suleiman, Ayo Lijadu and Charles Ujomu share their favourite experiences as fathers and what these beautiful memories mean to them in celebration of Father's Day.
Video
Eight events for 8th Edition – AMVCA 8
The Eight Edition of the Africa Magic Viewers’ Choice is going big with an eight-day plan lineup. Starting on 7 May 2022, the AMVCAs will host an Opening Night Gala, Runway Show, Young Filmmakers’ Day, Content Market Workshop, digital Content Creators’ Brunch, A Celebration of Africa’s Diversity; followed by the Nominees Gala, and lastly the BIG DAY, Awards Night on 14 May. The Eighth Edition of the AMVCAs is brought to you by Africa Magic in association with Multichoice and proudly sponsored by Amstel Malta.
Video
Day 62: Music, Gist And A Quarrel
The Pepper Dem Gang woke up to the beautiful sounds of music which soon progressed to a one sided quarrel featuring Venita.
Video
Day 62: “Thunder Fire You, Biggie” Venita
It was a daring night for some of the Big Brother Naija Housemates. From Esther, Diane and Mercy playing adult games to Venita cursing at Biggie, it was quite fun for them.