News
17 March 2017
He jokes about Bisola's weight.
Subscribe to Watch

It is often said that a man should think twice before joking about a woman’s weight. Why? Because some women will deal with you!

It seems ThinTallTony may not have figured this out yet. Luckily he was dealing with Bisola and the two of them are known to have that playful connection between them, as there have been many instances where they have been seen playing around the House. For instance, when Bisola put ice in ThinTallTony’s pants and when they play fought after Bisola’s return from their ‘paradise holiday’ with Bally.

Bisola and ThinTallTony had been playing outside while picking up garbage this morning, as part of their daily chores, and while playing around, she jumped onto his back and he mistakenly broke wind. Of course, Bisola reacted saying, “You’re disgusting!” 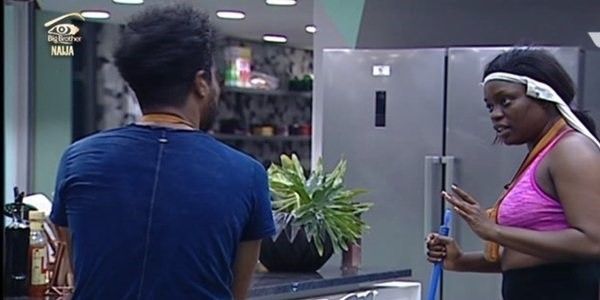 ThinTallTony responded mocking Bisola about her weight, connecting that to bad habits. “You’re disgusting. Look how big you are!”

For a moment there, that seemed to hit a nerve, as Bisola asked Efe, Bally, Marvis and TBoss, who had been busy with their daily chores, if it was acceptable for a man to talk about a woman’s weight in the manner in which ThinTallTony had referred to hers.

All this while, Marvis and Efe giggled and made silly comments. This seemed to bring the funny side of the situation, as ThinTallTony and Bisola would join in giggling briefly before carrying on with their ‘argument’. Bally was also roped in as Bisola’s “potential boyfriend” and the conversation moved to the funny side, as they all started joking around the apparent love triangle between ThinTallTony, Bisola and Bally.

It was only later that ThinTallTony and Bisola were seen still joking around with Bally in the garden, then further moving back into the kitchen for breakfast.

The Housemates seemed to be in a good mood this morning, swapping the daily exercise routine for indoor soccer, laughing and giggling away with each other.

Video
Simi: ‘Smile and Duduke’ Medley – Nigerian Idol
Our Nigerian Idol Judge Simi finally takes the stage and gives us a beautiful medley of her amazing hits Smile and Duduke.
Video
D’banj: Pop Medley – Nigerian Idol – Nigerian Idol
D’banj rocked the stage with a medley of his pop hits which include Emergency, Oliver Twist, Your Face Show.
News
Day 35: Twitter comments on the Eviction
Tonight the Big Brother Naija Housemates bid farewell to one of their own, but that was not all, as usual where Ebuka is involved some tables were shaken and the viewers did not miss it!
Video
Day 54: Elozonam Farms To Victory
For his speed, Pepper Dem Housemate Elozonam has won the Friday Night Bet9ja Arena Games. Watch how it all went down.