Day 48: DJ Neptune keeps them on their feet

News
11 March 2017
The Housemates screamed upon hearing he would be tonight’s deejay.
Subscribe to Watch

This was one of the first reactions from the Housemates, as celebrity deejay, DJ Neptune blasted his first track in the Party Room while they were still waiting in the lounge to be ushered in.

For a moment there while waiting, they seemed impatient, as the deejay dropped a few hits. A few group pictures were taken and for what seemed like ages, they settled down on the couch waiting for the Party Room door to open. Bisola was even heard saying, “Biggie we’re ready now.”

Bassey and Bisola’s reaction as they entered the Party Room first was priceless! 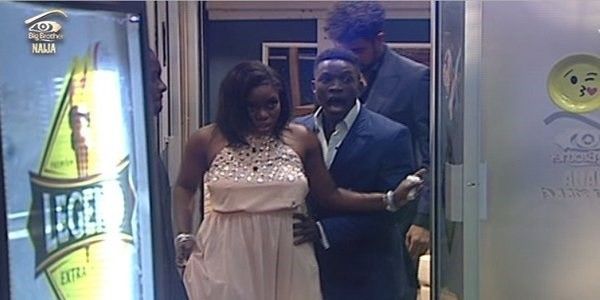 The other Housemates trailed behind them, greeting the deejay as they entered, headed straight to the fridge for drinks and hitting the dancefloor thereafter.

The deejay’s selection of music appealed to the Housemates, as they sang along while getting down. There were moments of screaming, as the deejay played popular music, the likes of Davido’s song titled “Dami Duro” and not even their men’s suits or the ladies’ skimpy dresses could stop them from getting down to the beat.

As soon as DJ Neptune stopped playing music, the Housemates shouted, "Biggie, ten more minutes!" clearly indicating they had a blast. He could not help but smile, as the Housemates continued chanting they wanted him to continue playing music. However, this had marked the end of the party and they were soon ushered back into the House by Biggie's Ninjas.

The Housemates decorated the Party Room earlier in the day, taking a break from preparing for the ONE AFRICA presentations that took place earlier this evening.

Video
Tag-team tactics – Music Buzz
The crew is joined by DJ Neptune to discuss the prowess of Dbanj and Don Jazzy, along with their immense contributions to the Naija music industry.
Video
What does being a father mean? - AM Exclusive
Edward Pam Fom, Whochey Nnadi, Ibrahim Suleiman, Ayo Lijadu and Charles Ujomu share their favourite experiences as fathers and what these beautiful memories mean to them in celebration of Father's Day.
Video
Day 41: Party Vibes With DJ Neptune
DJ Neptune showed us that he wasn’t from this planet as he dished some hot mix at the Saturday Night Party that had the Pepper Dem gang heat up the dance floor.
News
Day 68: A Praiz, DJ Neptune, and Alternate Sound party
For the final Saturday Night Party The Big Brother Housemates are being treated to a triple threat party with Praiz, DJ Neptune, and Alternate Sound bringing their best bangers.