News
16 August 2019
For a reward of 600 Bet9ja Coins, the Pepper Dem Gang became fishes in Biggie’s House.
Get DStv PREMIUM

The Twist
Tonight’s Arena Games required the Pepper Dem Gang to complete the Challenge in three teams. The twist is that these teams had to be different from their current team set-up of The Icons and Cruisetopia.
With the HoH – Seyi guiding the team selection process, we had: team one consisting of Khafi, Gedoni, Cindy, Omashola, Seyi, and Diane; Team two with Tacha, Enkay, SirDee, Venita, Elozonam and Joe and lastly, team three comprising Frodd, Jackye, Esther, Mike, Mercy and Ike. 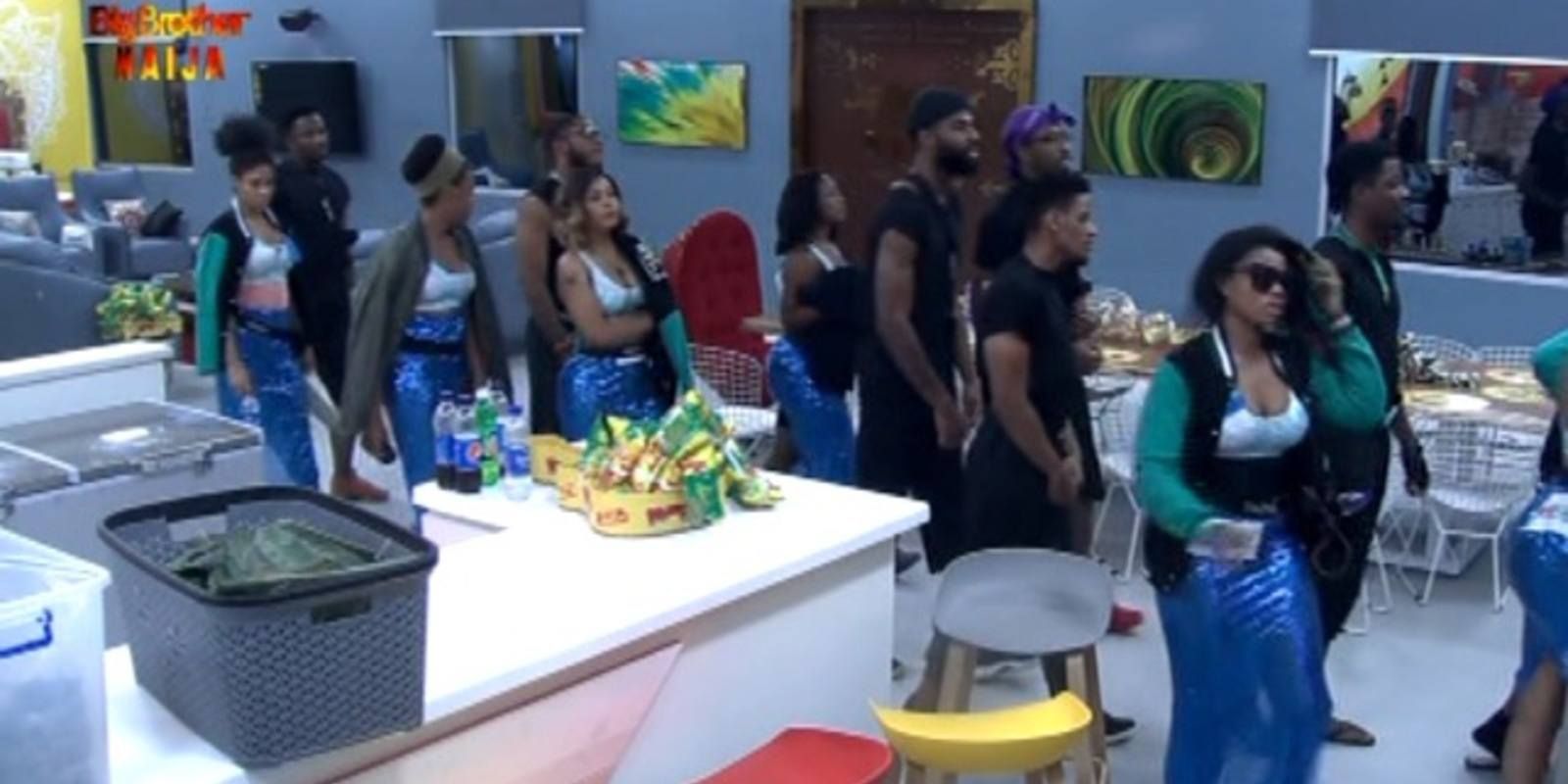 The Contest
Gorgeously dressed in their themed outfits, the Pepper Dem Gang displayed their fishing skills in the relay race Challenge.
As they successfully passed a piece of fish on to the next teammate in each phase, the Housemates went through a complete fish game. From the fish wiggle to the game of bubbles, the fetching of pebbles, the monkey bar Challenge, fish-catching Task and finally the shark feeding course, tonight’s Bet9ja Arena Games was an action-packed one. 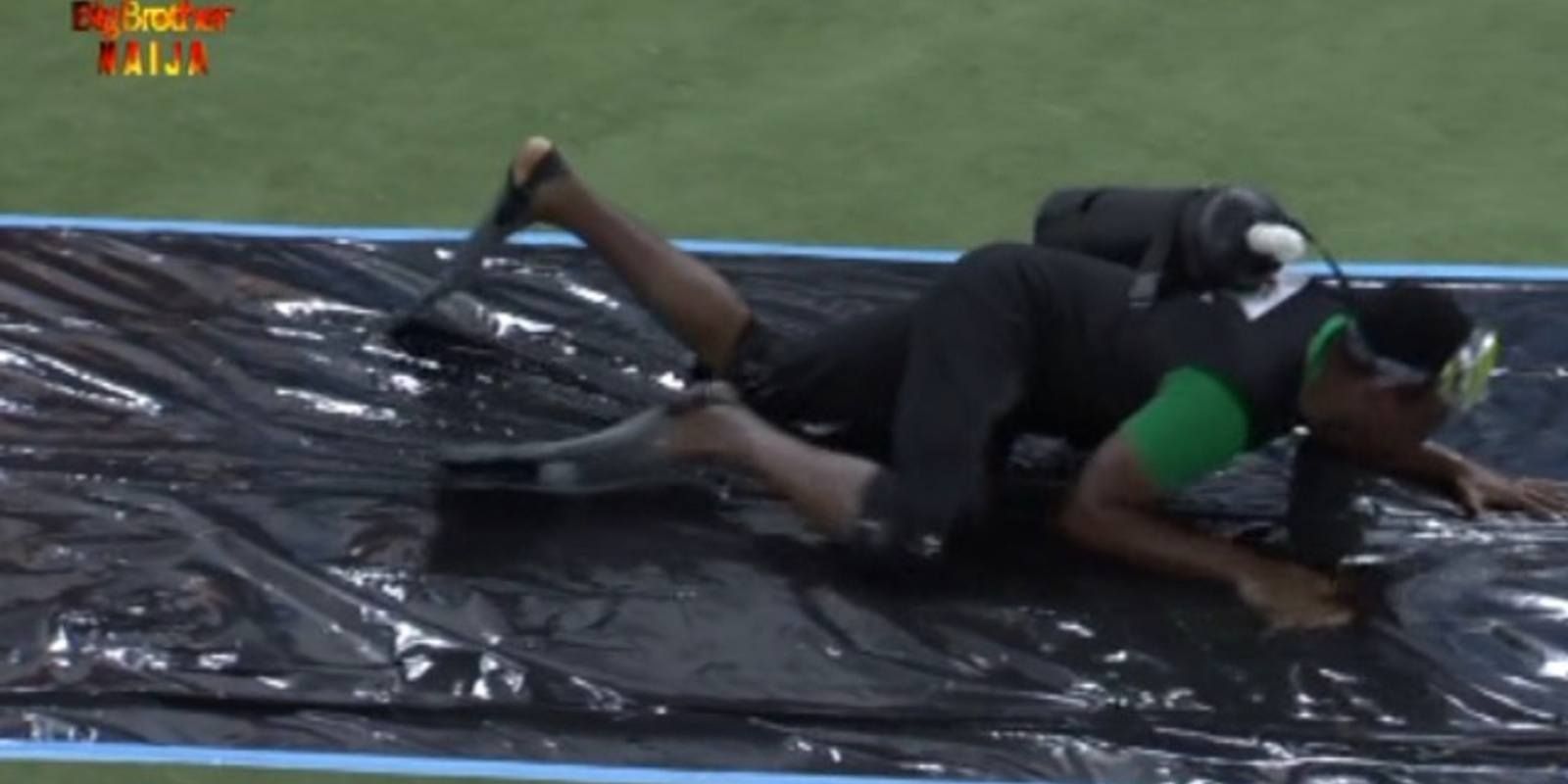 Ready, Set, Game!
In five minutes and thirty seconds, team one completed the Task after evidently flouting Biggie’s rules, which made them go through the Challenge over and over again. Surprisingly, they finished off before the buzzer went off. Teamwork speaking, perhaps?
Tacha, Enkay, Sir Dee, Venita, Elozonam and Joe successfully went through the relay race in two minutes, thirty-seven seconds; which made them the team champion in the Challenge. 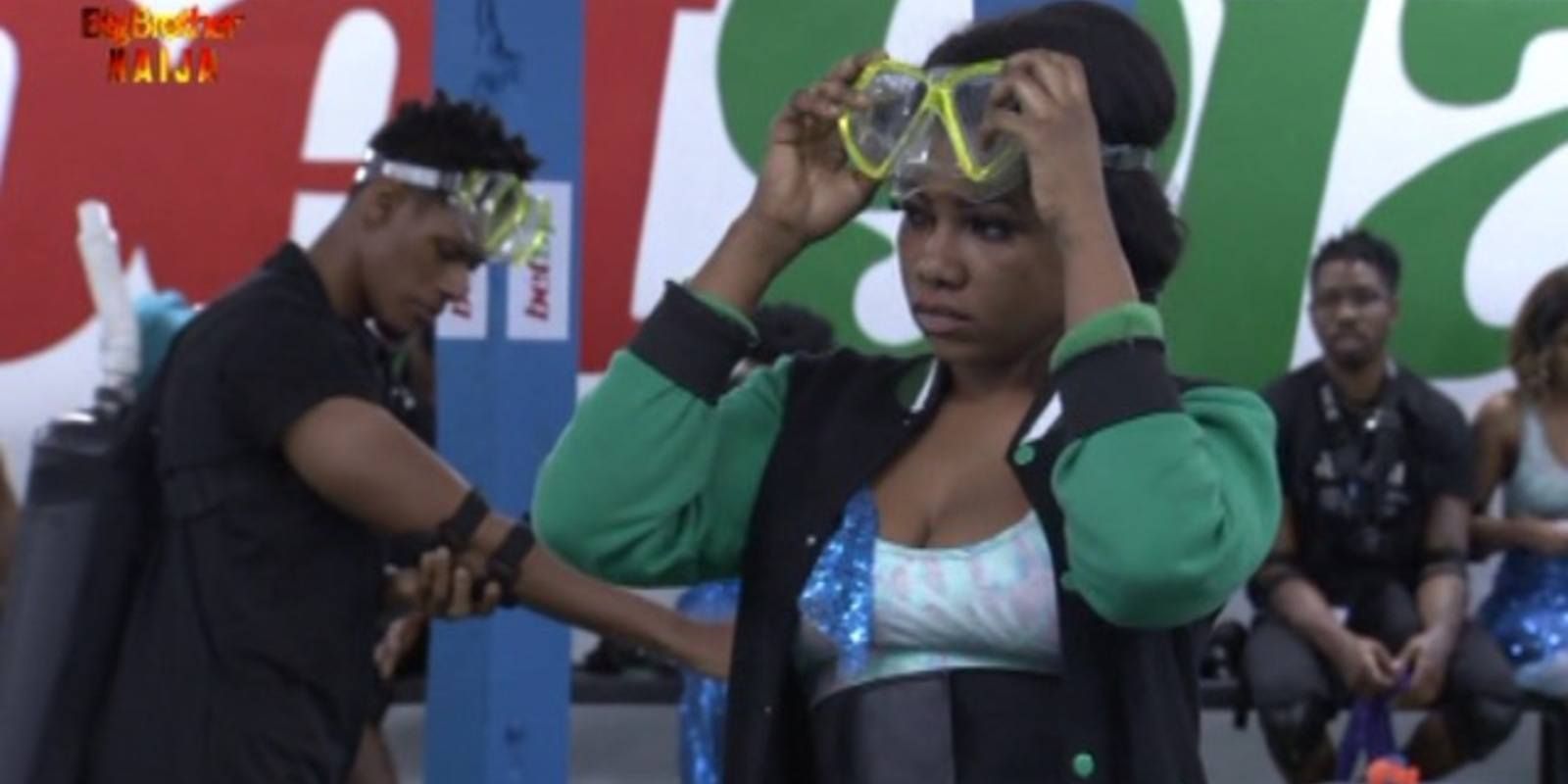 Psyche!
What’s a Challenge without the Pepper Dem Housemates going against Biggie’s rules? Teams one and two were rewarded with two additional minutes to their Task completion time. Which left team one with seven minutes, thirty seconds and team two with four minutes, thirty-seven seconds.
This sealed the Arena Games with team three being the winner of tonight’s fishing contest, as they completed the Challenge in three minutes and fifty-two seconds.
For this reason, Frodd, Jackye, Esther, Mike, Mercy and Ike happily walked out of the Arena with a hundred Bet9ja Coins each as Biggie congratulated them for being the team with the best time. 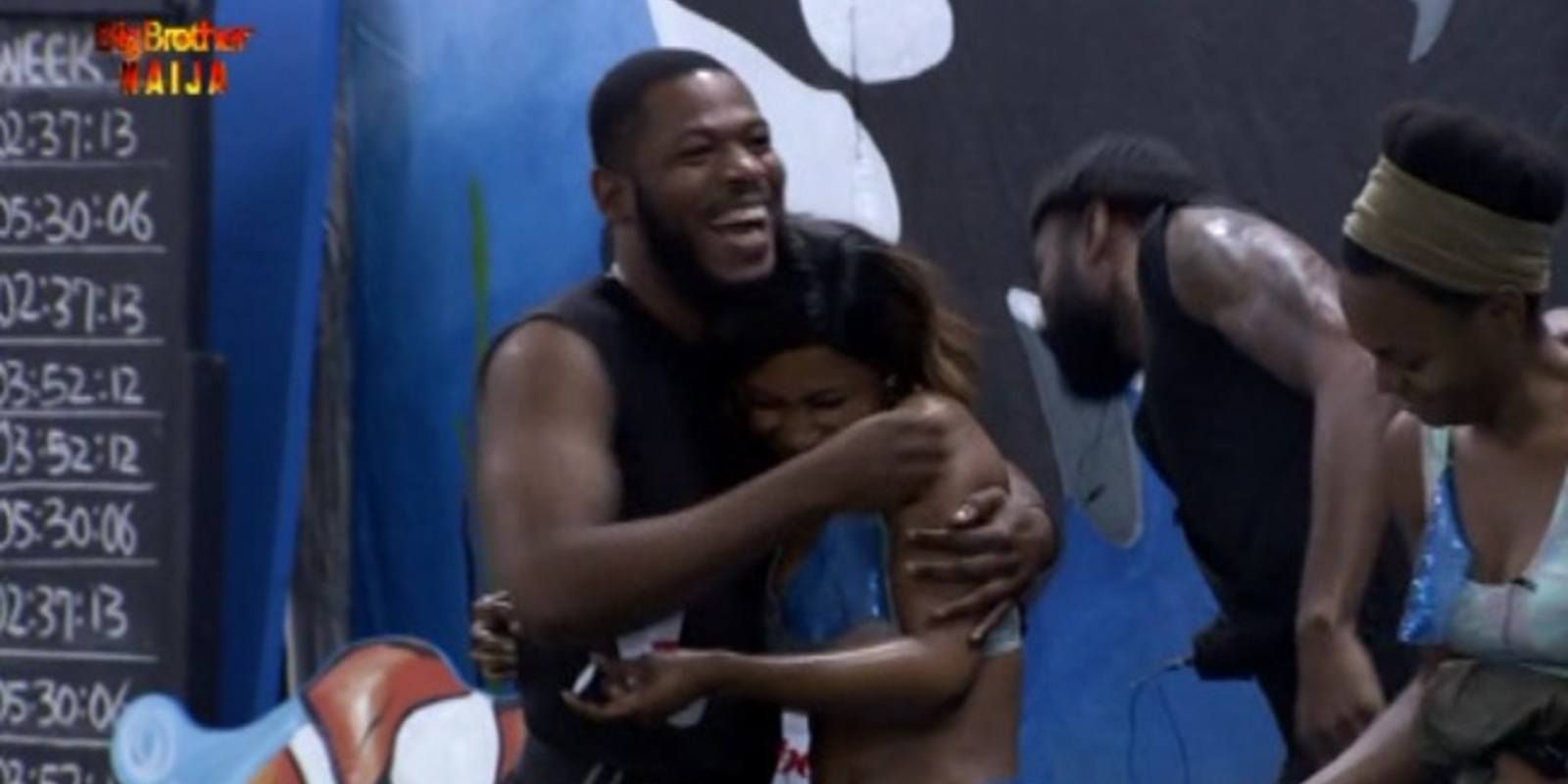 Rewards and Special Recognitions
Members of team three weren’t the only ones who got rewarded for their efforts. From the swear jar mission to the talent display Task yesterday, the Pepper Dem Gang did not fail to impress Biggie this week. For this, he commended the Housemates for the seeming commitment the House is showing.
In addition, Joe, Venita, Frodd, Elozonam and Enkay were given special mentions by Biggie for their great acts and performances in yesterday’s Wager presentation. 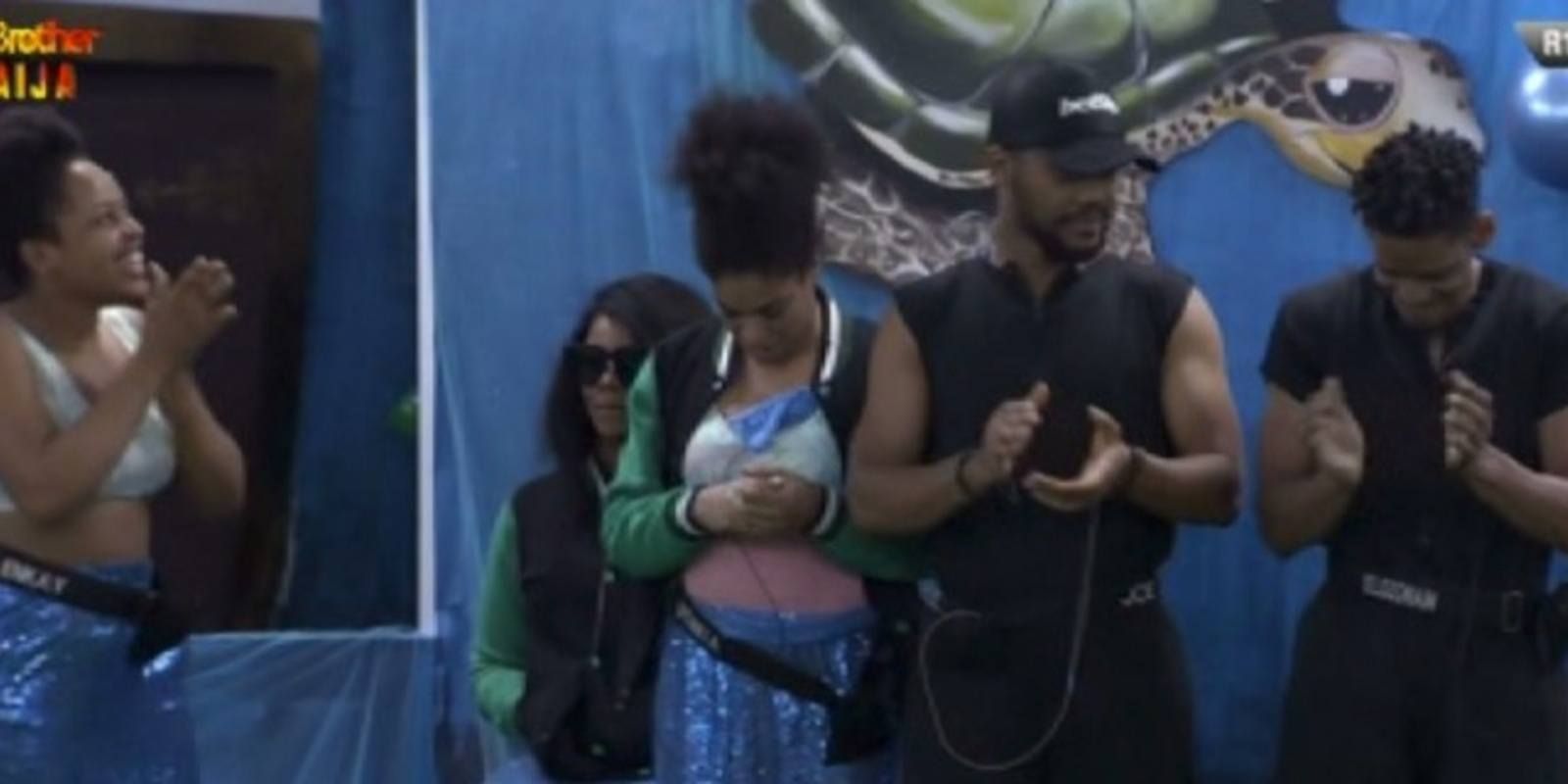 Way to go, Housemates! More wins ahead. Speaking of wins, we seem to be having a constant set of Task winners amongst the Pepper Dem Gang. Is this going to be a norm?

Video
Day 10: Give me my crown – BBNaija
In a heart to heart conversation with each other, Chichi and Chomzy speak about accepting their tag of being dramatic with their full chest. Will they serve more ginger throughout the season? Let’s wait and see. -- All of your favourite #BBNaija content on the official website, vote, play and watch the freshest content here: https://bit.ly/BBNaijaWebsite DStv: https://bit.ly/3ztNSPW Showmax: https://bit.ly/3PzIro4 Download on Android: https://apple.co/3OtMXmH Download on Apple: https://apple.co/3owIipn Don't miss a single moment, follow #BBNaija on our social platforms: Facebook: https://www.facebook.com/BigBrotherNaija Twitter: https://twitter.com/BBNaija Instagram: https://www.instagram.com/bigbronaija
Video
Meet Groovy – BBNaija
Groovy plans to take it to the next level by being as fun and entertaining as possible. He has no plans to break any of Biggie’s rules. Let’s wait to see if he sticks to his word.
Video
Day 14: Ike Is Ready To Juggle Beauties Mercy And Ella
Ike tells Jackye, Omashola and Mike what his game plan is concerning his love interests; Mercy and Ella.
Video
Day 26: Mike's Provocative Advice
When Frodd went to Mike for advice, he never expected that he would be hit by the truth that made him look uncomfortable.