News
09 March 2017
MC felt the engagement should go down in the book of records.
Subscribe to Watch

“First time in the Big Brother House, we brought characteristics of all the different states into one wedding. I think we’ve broken a record!”

This was how the traditional engagement MC, Bassey described the ceremony during his joint Diary Session with the Groom’s father, Bally.

Biggie called the Bride and Groom, Marvis and Efe first into the Diary Room after the traditional engagement and asked them to rate their performance, to which they both responded positively.

“It must have been a real dress rehearsal for future and it sounds like you were both in your ‘home turf’. Should we expect something from the two of you outside of the House,” teased Biggie. They responded with laughter, with Marvis adding that, “We’ll keep you guessing Biggie,” as she giggled.

She further said the engagement was far beyond her expectations, adding that the Bride’s parents, Bisola and ThinTallTony stole the show with their performance. 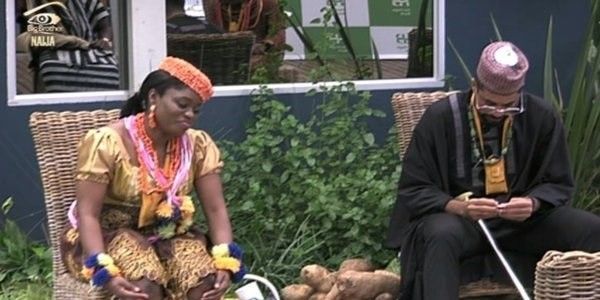 The Bride’s friend TBoss agreed that their performance as a group was exceedingly good. “For a moment, I forgot it was make-believe. There were moments where I teared up a bit. The negotiations went well and I’ve actually never witnessed traditional wedding negotiations,” she said.

Video
What does being a father mean? - AM Exclusive
Edward Pam Fom, Whochey Nnadi, Ibrahim Suleiman, Ayo Lijadu and Charles Ujomu share their favourite experiences as fathers and what these beautiful memories mean to them in celebration of Father's Day.
Video
A bitter-sweet engagement for Funbi – Unmarried
After a heart-melting proposal, a romantic engagement party, Funbi got the shock of her life when she ended the night with a slap from her fiancé.
News
Day 46: Housemates get a profound Diary Session – BBNaija
Housemates bare their innate thoughts with Biggie on their welfare, Evictions and their strategy should Biggie flip a switch in the Voting process.
Video
Day 56: Ebuka Engages Housemates On Relationships
Ebuka asked Sir Dee about the hiding saga in the House. He also engaged the Housemates on their reactions to Elozonam’s Veto Power decision