News
06 March 2017
He picked the Golden Egg out of the box.
Subscribe to Watch

ThinTallTony must have some lucky streak! He retained his HoH position during the game of finding the Golden Egg and as Biggie said, it was a game of chance.

This makes it the second time in a row he’s won the HoH tittle, as he won last week where they first had to guess a number, then inflated and popped balloons.

For this week’s Task, the Housemates had to first pick numbers from a hat and proceed to pick an egg out of a box, in the order that they picked the numbers.

Each time a Housemate failed to pick the Golden Egg, they had to smash the egg they had picked on their head

“If a Housemate refuses to break an egg on their head, they will be disqualified,” Biggie warned the Housemates. 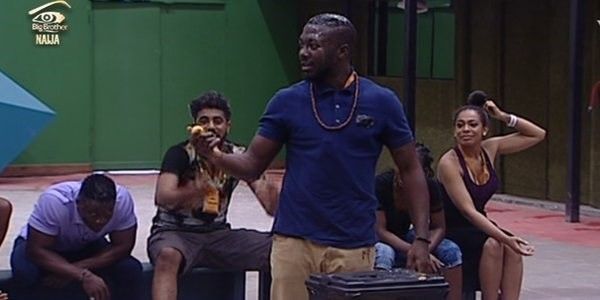 Video
Day 16: HoH remains on Level 1 as Adekunle wins– BBNaija
Level 1’s Adekunle squared off with Pharmsavi and Khalid for the HoH title in a challenge where they had to recreate a beaded necklace using a picture that Biggie gave them as a reference.
Video
Day 9: Timing and speed at the HoH Game – BBNaija
Housemates gathered in the Arena yet again to go head-to-head for the title of Head of House. As the incumbent HoH, Eloswag was not allowed to play, along with the new Housemates, Deji and Modella. As their first Game, Housemates had to set the watches provided to them to 4pm. The top three contenders were Dotun, Hermes and Cyph, but only one reigned supreme.
News
Day 85: Seyi's Third HoH Title
For the third time, Seyi has won the Head of House title.
Video
Day 85: Seyi Clinches His Third HoH Title
After an intense challenge, Seyi won the Head of House making it the third time in the Pepper Dem House.