News
12 August 2019
Seyi has broken a record as the first member of the Pepper Dem gang to win the HoH title twice in a roll.
Get DStv PREMIUM

The Task for the Head of House contest for this week was tagged the impossible line. But unlike the previous challenge, only eight out of the eighteen Housemates were allowed to participate. Remember Biggie decided to make a scapegoat out of some members of the Pepper Dem gang for their disobedience. For this reason, Elozonam, Enkay, Frodd, Jackye, Joe, Mike, Sir Dee, Omashola, and Tacha did not participate. Here’s another twist: Biggie’s Ninjas were on strike and so Omashola and Jackye stood in for them.

As a reputable position, the HoH title attracts a luxurious room, immunity from Nomination and 250 Bet9ja coins.

Blindfolded, they had to walk the line from the beginning to the end without stepping out of it. In the first round, Cindy, Diane, Mercy, Seyi, Venita and Gedoni gave it their best shot. For their lack of balance on the line, Esther, Ike and Khafi lost the challenge. 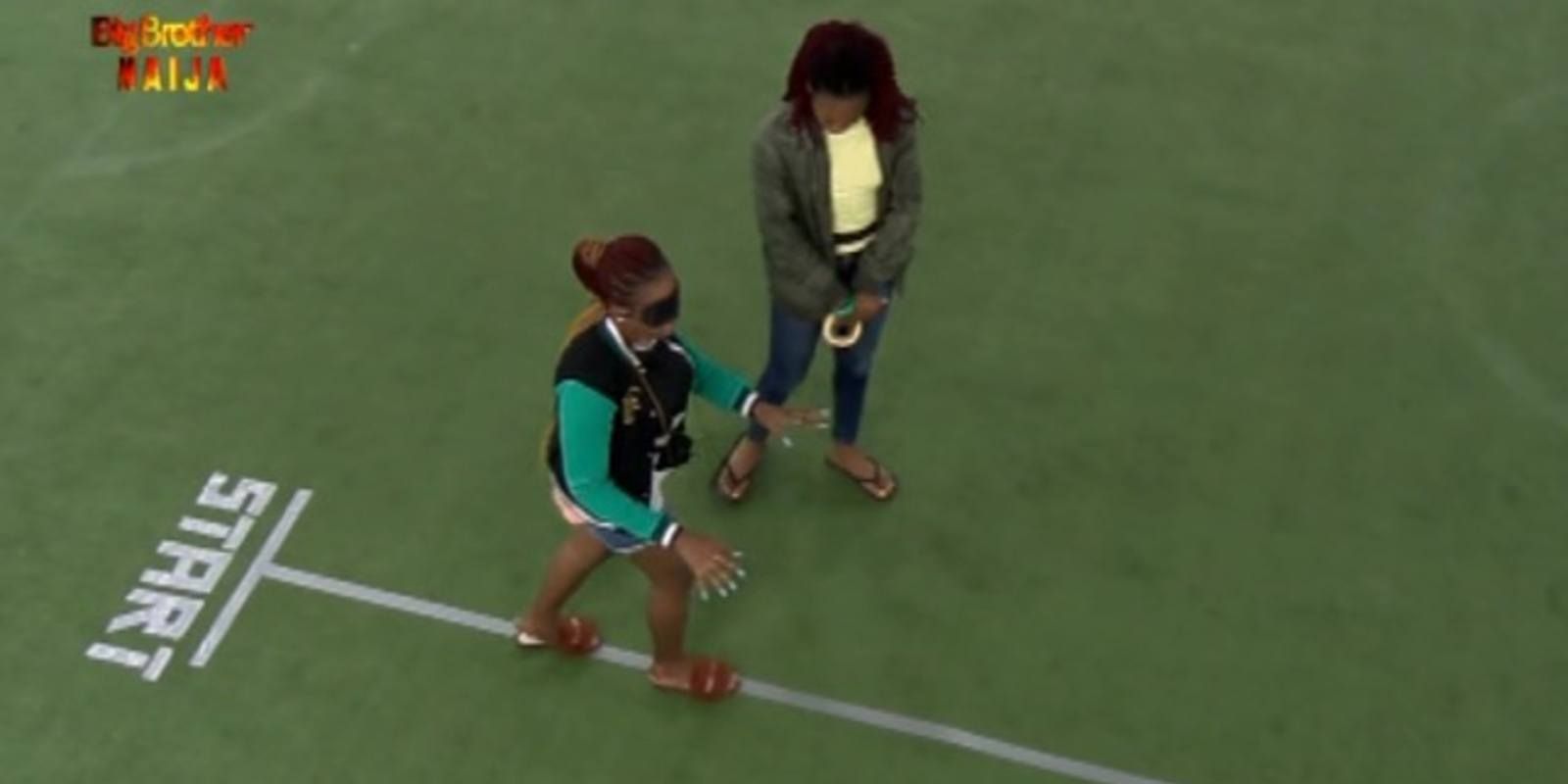 In the course of the Task, some Housemates got smarter than the others by dragging their feet to have a feel of the line. This made the challenge a piece of cake to them. So in the next round, Biggie ruled out feet dragging and the blindfold was thoroughly checked for any possible opening. Also, they had to start where had ended in the previous round.

The second round saw Diane, Mercy, Gedoni, Venita leaving at the first attempt. They couldn’t even move past three steps on the line.

The last two Housemates were Cindy and Seyi. But this time, they were timed, so the fastest person to get to the finish line became the winner. Cindy was so swift on the line that we thought she might win. Little did we know that Seyi’s determination would push him to become a cheetah on the line with the way he moved his legs on the line. Beating Cindy’s record of one minute, Seyi got to the finish line in just 45 seconds. What a remarkable feat!

For finishing within the shortest time, Seyi, who is the incumbent HoH retained the title. This is a giant leap as he has broken a record as the only Housemate to win the lofty position twice. Great job, guy! He is now 250 Bet9ja Coins richer and has also won for his team, Cruisetopia, 10 Bet9ja coins each. As the runner-up, Cindy’s Icons also went away with 20 Bet9ja coins each. Seems Biggie was on a good mood!

Remember the last time Seyi won the title, we were surprised when he chose Esther over Tacha with whom we have noticed a bond as his bedmate. This time, Tacha rejected the offer when Seyi felt it was time to reward her. Disappointed, he had to go for Venita instead.

Will Seyi's HoH win change the dynamics of the game or will it be business as usual? We shall see.

Watch how Seyi did it here.

Video
Day 23: Eloswag wins the HoH Games– BBNaija
Level 1 Housemate Eloswag keeps the title in his House once more as he wins in assembling a jigsaw puzzle and counting sticks.
Video
Day 16: HoH remains on Level 1 as Adekunle wins– BBNaija
Level 1’s Adekunle squared off with Pharmsavi and Khalid for the HoH title in a challenge where they had to recreate a beaded necklace using a picture that Biggie gave them as a reference.
News
Day 85: Seyi's Third HoH Title
For the third time, Seyi has won the Head of House title.
Video
Day 85: Seyi Clinches His Third HoH Title
After an intense challenge, Seyi won the Head of House making it the third time in the Pepper Dem House.