As if to ‘add salt to the injury’, Biggie informed them that they were all up for Nomination and possible Eviction today.

The next day after the Eviction Night was tense, as they had a lot of unanswered questions, oblivious of the fact that Bisola and Bally were actually watching them from an “island paradise”.

This week, themed Extreme Art, saw the Housemates doing a lot of Tasks that involved paint. These included paintball, paint volleyball and painting using their bodies, among other activities. 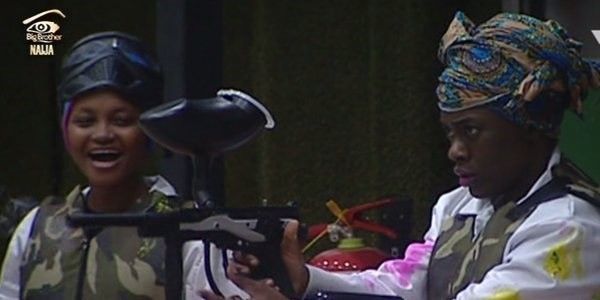 ThinTallTony won the HoH Task, taking over from Kemen and the week’s Tasks started off with Biggie asking them to draw portraits of Biggie. They’ve also had to make sculptures of fellow Housemates. The week got a lot more interesting, as House visitor IK brought back Bisola and Bally into the House and they were welcomed with excitement by their fellow Housemates.

On the visitor’s side, stand-up comedian AY, TV personality IK and RnB singer Banky W were this week’s guests. They all had sound advice for the Housemates and as usual, parting selfies were taken at the sound of the buzzer.

Thursday was a bit of a disappointment for the Housemates, as they lost their 100% Wager because Biggie felt they had not put their all into the Tasks during the week. Bassey came up tops on Friday during the games, choosing Debie-Rise as the Housemate he would share his prize with. There were no surprises there, as the two are pretty much close.

Biggie pushed the Housemate’s artistic creativity even further on Saturday, as he asked them to create a Wall of Fame, by painting sketches of anything they thought would be fit to go on their wall, provided it was not famous people and monuments.

As usual, the Saturday Night Party was the highlight of the week, as the Housemates danced the night away with DJ Waxxy.

Gallery
The much awaited judgement – Nigerian Idol
Theatre Week ended with a day of judgement that saw a Top 12 emerge as the Nigerian Idol Contestants for Season 7
Video
Day 71: Liquorose gets a party recap – BBNaija
Last night's party was a bit of a blur to Liquorose and Emmanuel is kind enough to give her the good, bad and ugly details of it all.
Video
Day 42: The Wrap Up – Wins Of The Week
Long week, but big wins. A couple of the Housemates reap the reward of the hard work they put into week. From the Oppo Runway Show to the Munch It Challenge, It's been quite a week.
Video
Day 42: Venita, Frodd and Omashola Explain Themselves
Ebuka gets answers about the Venita-Frodd-Esther-Omashola love-square.