Day 39: Volleyball with a twist

News
02 March 2017
Balloons and paint were used during the game.
Subscribe to Watch

Biggie had the Housemates playing a different kind of volleyball this afternoon. It involved balloons and paint, instead of the usual volleyball ball.

The Housemates were divided into two groups, with Team A led by Debie-Rise and Team B by Marvis. The teams had to pass a balloon filled with paint no more than three times, before trying to burst it on their opponent’s side of the net. 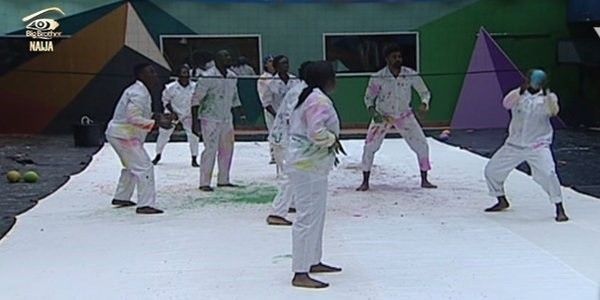 Team A consisted of Debie-Rise, ThinTallTony, Bally, Uriel and TBoss, while Marvis, Bassey, Kemen, Efe and Bisola were Team B.

Before the game started, Biggie reminded them that playing sports was good for one’s body.

“Where is the energy in the House? Could it be that you’re missing somebody?” Biggie wondered.

The Housemates got into it, as soon as Biggie’s Ninja sounded the buzzer and soon enough, there was paint all over the Arena floor. Biggie nullified a few goals, ThinTallTony’s in particular, as he felt the balloon was squashed on the porch, instead of on the opponents’ side of the court. 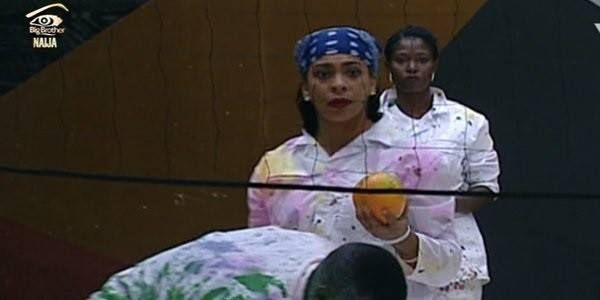 At the end of the game, TBoss told Debie-Rise that she did not feel part of the team during the game.

“I thought the best way to do it was to pass the balloon to the people closest to the net,” Debie-Rise defended her plan.

TBoss was still not convinced, “I didn’t stay close to the net because Bally squashed the balloon. You could have passed a balloon to me,” she said. Debie-Rise then promised to pass the balloon to TBoss, should they play another game and be on the same team.

Although Biggie communicated his disappointment in the teams, saying they did not show much team spirit, some of the Housemates felt they had actually played a good game.

Video
Samson gets the last laugh – MSI
Samson started his meal sober while his brother gloated, but in a twist of fate, he ended up having the last laugh.
Video
D’banj: Pop Medley – Nigerian Idol – Nigerian Idol
D’banj rocked the stage with a medley of his pop hits which include Emergency, Oliver Twist, Your Face Show.
Video
Day 39: Housemate’s share Eviction Conspiracies – BBNaija
The Housemates have a set of conspiracy theories about the last Evictions and also believe Biggie is going to bring in new Housemates.
Video
Day 39: Housemates share a little kindness – BBNaija
The BBNaija Heads of House declared today as ‘Acts of Kindness’ day. Housemates are expected to show acts of kindness as well as share Diary Sessions with each other.