There was a spray gun, some paint, screaming and a lot of ouchies!

That pretty much sums up the Housemates’ afternoon, as they played a game of paintball. This was their first Task for the day, after a morning filled with several surprises.

Immediately after changing into comfortable clothes, in readiness for the Task, the Housemates convened in the Arena where HoH ThinTallTony paired them into five pairs. 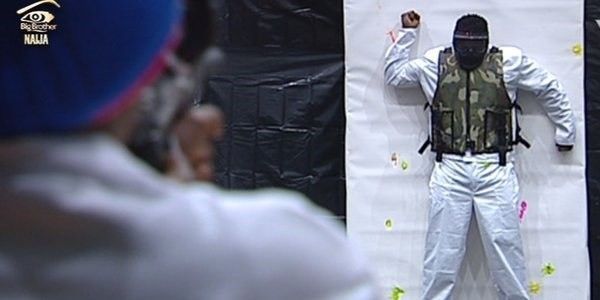 He was paired with Uriel, Kemen with Marvis, Efe with TBoss, Bally with Debie-Rise and Bisola with Bassey. The Housemates took turns in their pairs, with one being the paintball shooter, while the other as the interactive part of the frame canvas and then vice versa, after a round of shooting.

First up were Bisola and Bassey. Bassey, the shooter, had her screaming, as he took shots at the canvas. Some of the shots landed on Bisola. She had her turn, as she too fired strong shots at the canvas, with some landing on Bassey. Next up were Efe and TBoss, who were followed by ThinTallTony and Uriel, Bally and Debie-Rise, then finally Kemen and Marvis. 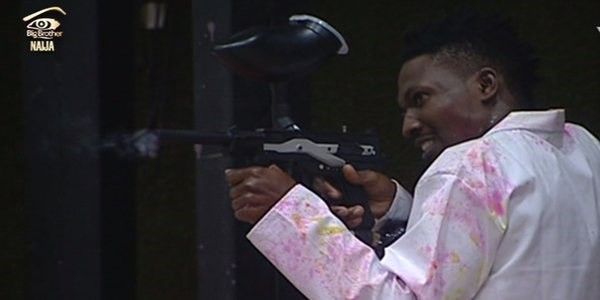 Immediately after all pairs had taken turns in shooting, Biggie wondered which team had the best artwork. A few names were mentioned by the Housemates, before Biggie asked them to step away from the artwork and further congratulating the Housemates for succeeding in creating fine pieces of art.

Video
Pain for painting – MSI
James and Samson finally meet their match when they have to go the extra mile to please Nnenna's friend, Dumebi, in order to get their painting back.
Video
Day 38: Housemates get on this Revolution – BBNaija
Housemates rehearse their jingles, sales pitches and skits for their Revolution Plus Property Task and we are here for this creativity.
Video
Day 38: A Shoulder To Lean On
Despite the peaks and valleys between Frodd and Venita, both have found out that they can lean comfortably on each other in the Big Brother Naija House.
News
Day 86: Mixed Feelings Everywhere
The Big Brother Naija Housemates didn’t see the Nomination outcome coming and they talked to Biggie about it.