News
28 February 2017
Today’s Diary Sessions was primarily about the Housemates’ expression of Big Brother and boy did they put it all on the canvas.
Subscribe to Watch

Bassey kicked off the Diary Sessions with his painting in hand. He claimed to have drawn inspiration from the fact that Big Brother is Nigerian hence the primary use of the colour green in his artistic expression. He also said he believed Biggie had a stern face with strong features which led to his painting looking the way it did. When asked if he could Nominate two of the already Evicted Housemates to return to the House, he opted for Bisola and Bally. Bisola for being the life of the party, and Bally because he feels a strong connection to him. 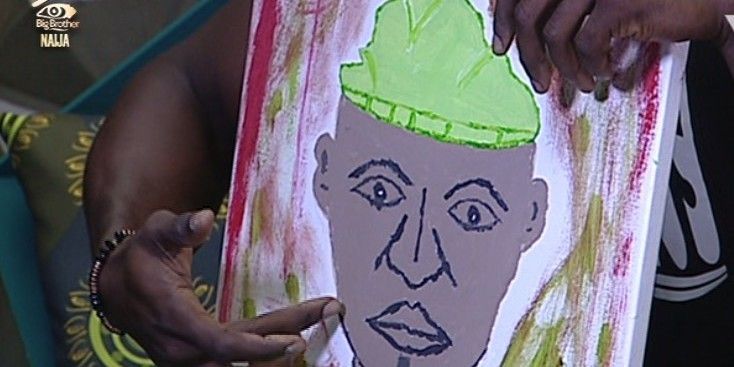 Debie-Rise feels Big Brother is built, very emotional, caring, with a strong fatherly/brotherly personality. She created her expression of Biggie based on a perception of love and she felt she did a great job. When asked to name two Evicted Housemates to return to the Big Brother Naija House, she picked Soma and CoCoIce. 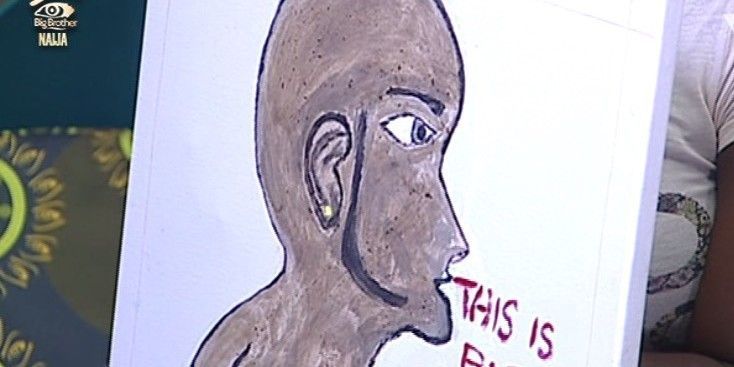 Efe took a multi-personality approach with his artwork, citing that Biggie couldn’t be just one person. He added a few ghost elements to his artistic interpretation to signify the other people who helped out Big Brother in the 24 hour surveillance of everything. He told Biggie he would love to have Bisola and Bally back as he felt Bally was very genuine and Bisola was a big sister figure to him and his biggest cheer leader in the House. 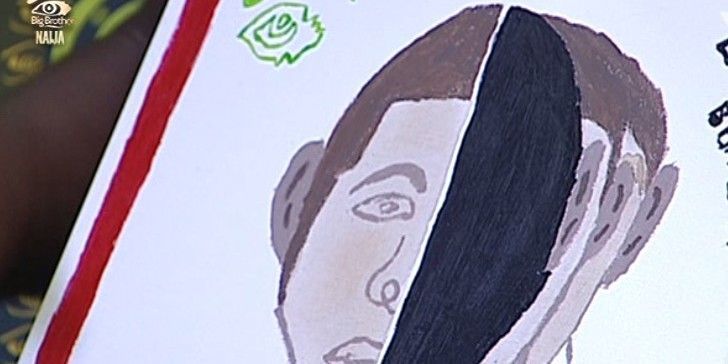 Kemen ignored the instruction from Biggie to put a face to the voice of Big Brother and went with an abstract theme, citing that he felt Biggie was all seeing and everywhere. He was also quick to admit to Biggie that he missed Bally a lot because he was a very observant and intuitive person. When asked which two evictees he would want back in the House, he responded Bisola and Bally. 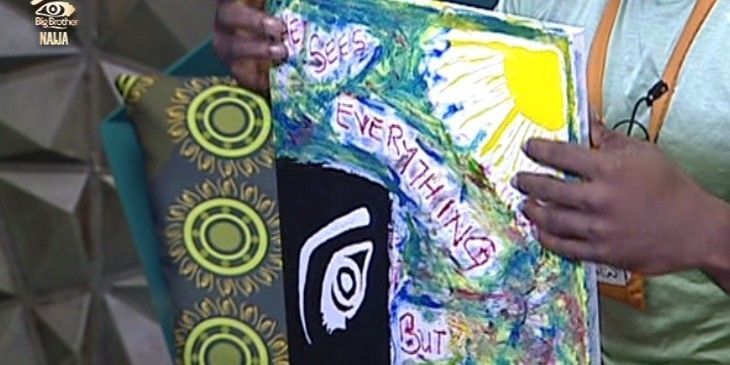 Another Housemate who decided to take the abstract route was Marvis. She simply wrote out the words Big Brother and added a crown to it, and her reason for this was that she felt Big brother wasn’t a person but an all seeing being, impartial in all it’s ways.  She confided in Biggie that she missed Bisola the most because there was never a dull moment whenever Bisola was around, and if she could have two Evictees back into the BBNaija House, then it would be Bisola and Bally. 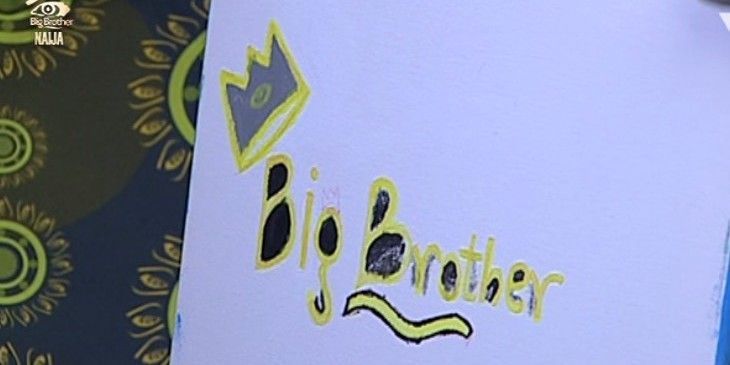 TBoss said she created her portrait based on the facts that she thought Big brother was a very stylish manly- man who took very good care of his outward appearances and was well groomed. When asked who she missed the most, there was no hesitation as she named Gifty, citing that though the Evicted Housemate was young, she was also very determined, focused and driven. She also said she missed Miyonse as he was her safe zone in the House. She named these two Evicted Housemates as the people she would want to see return to the BBNaija House. 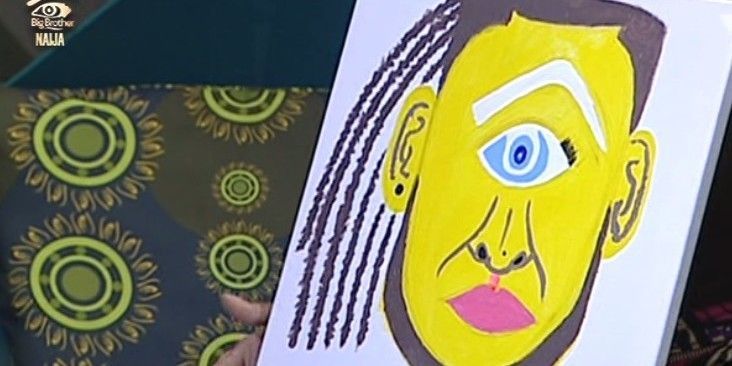 ThinTallTony got very analytical with his headspace when trying to put a face to Big Brother. His play with colours and symbols had specific meanings. The hands signifying openness, the use of the colour red to signify danger (that Biggie shouldn’t be messed with), the landscape to show Big Brother’s ubiquity, and the extra eyes to connote the different onlookers all trying to figure out Biggie’s true identity. When asked, he said he missed Bisola the most as they both got along very well and “she gets me” he added. He also had lots of nice things to say about Jon, citing the levels of maturity bellied by his young age and look; so these two Evictees would be his choice should Biggie decide to bring back any of the past Evictees.

The last Housemate to enter the Diary Room was Uriel, with her painting in tow. She said she imagined Biggie to be somewhat geeky and particular about his looks, so she made his hair out of used tea bags, and found some hair extensions to use as his beard. She used recycled containers to make glasses for her Biggie interpretation and added a shirt and tie effect to finish off the look. When asked by Biggie who she missed the most she named Soma first saying “he’s special to me”. She also said she missed Gifty’s crying and also being teased by Bisola, but Soma tops the list. When asked to name two Evictees she would love to see return, she named Soma (talented and driven) and Bally (“he’s my guy. He is cool”). 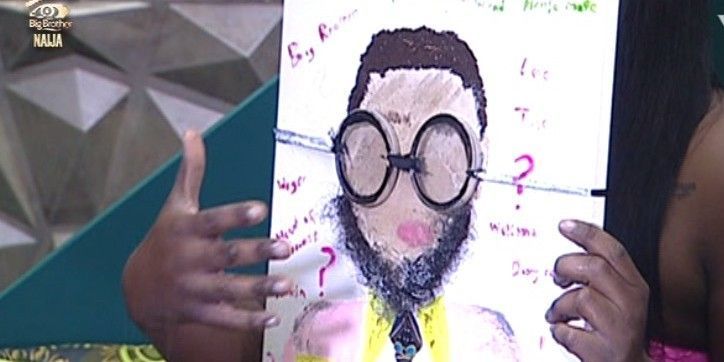 With all the artistic impressions of Big Brother, which of these portraits do you think looks like Biggie the most? Or which one stands out the most? Feel free to share your comments to our social media platforms using the #BBPortrait, and if you are feeling creative, then share your own impression of what Big Brother looks like as well.

Video
Day 10: The jogging Task– BBNaija
Biggie puts the #BBNaija Level Up Housemate to a little sporting activity as they carry out a jogging Task that involves them jogging around the House throughout the day. This means they have to jog whenever they move around to perform any activity in the House.
Video
Meet Ilebaye – BBNaija
Ilebaye isn’t here for boredom. She promises to bring all the Gen-Z energy to Biggie’s House. If it were up to her, it would be a party every day!
Video
Day 37: Biggie brings on the music – BBNaija
Biggie surprises the Housemates with a guitar and piano. This leads to light banter on how to play the instruments as well as the sharing of a few musical knowledge.
Video
Day 37: Whitemoney’s weird game – BBNaija
The ‘Shine Ya Eye’ geng are known for their funny games but we are still not sure what this one is. Also Pere being the victim of Whitemomey’s game is the comedic relief you want to see today.