Day 36: The stakes keep getting higher

In an exciting and action packed day in the House, the Housemates tried to make sense of last night's shocking Live Eviction show which saw them say goodbye to Fake Housemates, Jon and Ese. Furthermore the remaining eight Housemates were lead to believe that Bisola and Bally were also unceremoniously Evicted from the House. In reality, the two Paradisians were a lot closer than they knew. That said, more than one Housemate had said that Bisola was too popular to leave just yet and that it was all a set-up!

The Housemates spent much of their afternoon preparing their latest dancing Task to Simi's gorgeous song,  "Love Don't Care" which she performed on Biggie's stage the night before. Debie-Rise and Kemen were the center of attention as the whole performance was centered around them.

They soon turned their attention to who was the surprise guest, and late in the afternoon, none other than the beautiful Simi walked through the doors to the delight of all. Before anything else could happen, the Housemates treated Simi to a performance of them dancing to her hit song and she was visibly moved. 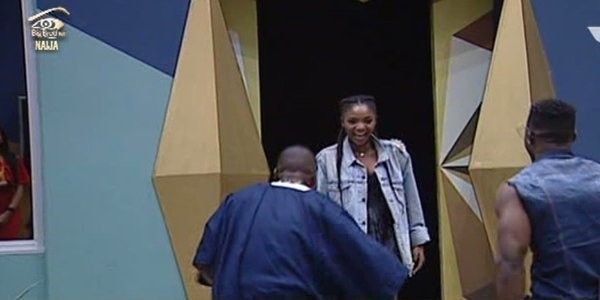 She soon sat down and chatted to the Housemates about why they had come into the House, with each Housemate chatting about their hopes and dreams as they all agreed that Big Brother Naija was the best platform to showcase their many talents.

It was too short for her as she also had another visit outside the House at Biggie's secret Paradise vacation spot where Bisola and Bally were living a life of luxury as a reward for their immunity. They chatted like old friends and Bisola told Simi about the first time she saw her live. As it was in the House, Simi's time in Paradise was also soon up and she left as swiftly as she came.

Next up was the small matter of the Head of House Task.  The first round was won by TBoss, ThinTallTony, Marvis, Debie-Rise and Uriel who all guessed closest to the number that Biggie's Ninja wrote down. Efe was visibly upset with himself, and he let Biggie know how much later in his Diary Session. Debie-Rise and Uriel were the next to be elliminated as five became three and Biggie got ThinTallTony, Marvis and TBoss to pop some balloons. They misunderstood Biggie and Biggie had to call them to order and remind them that they had to pop the balloons with their bums. ThinTallTony's bum won out and he was soon crowned the week's Head of House and with that, immunity from possible Eviction.

Biggie called in the Housemates one by one afterward and asked everyone who they would have voted out with TBoss getting the most votes (five in total). Kemen, Efe, Uriel, Bassey and Debie-Rise all received three votes each. It seems as if the Housemates are ganging up on the new Igwe's new flame. TBoss even mentioned to Biggie in her Diary Session that ThinTallTony had told her that "He likes me." The resident House ladies man confided to Biggie that he was "Just teasing," as he was, very much keeping his eye on the prize (something Simi had advised them to do earlier too). Most felt that ThinTallTony would make a great Head of House. It is interesting to note that Marvis only got one Nomination. She seems to be a dark horse in the game.

Later, after the likes of Uriel and Efe had play wrestled on the couch, the Housemates settled down to chat quietly to each other with Kemen and Uriel chatting long into the morning. Their topic of discussion was ThinTallTony and TBoss and they reckoned that he would never admit to liking TBoss because he had already gone "too far with Bisola."

Kemen also convinced Uriel that Biggie was playing games with them and that Bisola and Bally were coming back. Kemen also confided in Uriel, saying that he would make it to the final if he survived this week's Eviction. Uriel had earlier Nominated Kemen in her Diary Session as the one she most wanted to leave the House saying that she didn't trust him but later told Kemen that of all the guys in the House, she felt safer talking to him.

Video
Abigail: ‘Higher Love’ by Whitney Houston – Nigerian Idol
Abigail leaves viewers wanting more thanks to her amazing performance of Whitney Houston’s ‘Higher Love’. The track was a bonus on the Japanese edition of her third album, ‘I’m Your Baby Tonight’.
Video
D'banj's unexpected duet – Nigerian Idol
The last thing anyone would have thought of happening on the first day of auditions was a musical collaboration between the Koko Master D'banj and a contestant. However, this unexpected collaboration happened with Obinna who despite not getting a 'Yes', made the best of his moment with D'banj.
News
Day 36: Week 5 in Biggie’s House – BBNaija
Hmmm, the right question would be what didn’t happen this week! Biggie’s Housemates took us through some interesting ups and downs in Week 5.
News
Day 36: Ozo’s second HoH win
After a very competitive and tight Challenge tonight, Ozo emerges as this week’s Lockdown Head of House for the second time this Season.