News
17 February 2017
The Housemates are given four challenges to overcome to succeed in their quest to win big in the Friday Night Arena Games.
Subscribe to Watch

After a long and arduous day of the Housemates getting ready for their Saturday Night Denim Party, it was time for the Housemates to test their skills on Biggie's obstacle course in the Friday Night Arena Games. The Housemates were informed that they had six stages to navigate in a complex course that challenged them mentally and physically. Biggie singled out Bisola saying that Biggie hoped she did better in this challenge. So, no pressure there.

The first challenge was a mental test to use the priovided shapes to create a replica of an image that they were briefly shown, with Efe being the first Housemate to start the challenge. They had to successfully complete the first challenge before they could move onto the next. 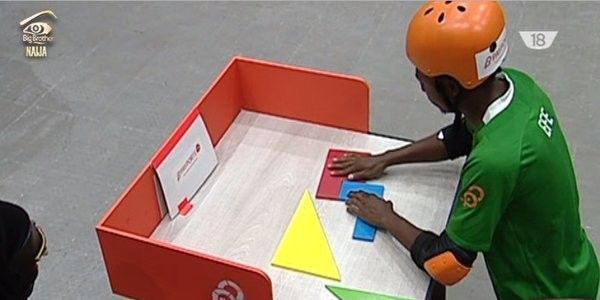 The second challenge was entitled "How long can you go?" and for this one they had to crawl under a net and through two pools of water to the other side. Biggie provided a tip "Only the fear of drowning can hinder you from swimming." The third challenge was a familiar one to the Housemates where they had to climb through an obstacle to the next challenge, number four, which required the housemates to swing from one platform to another. 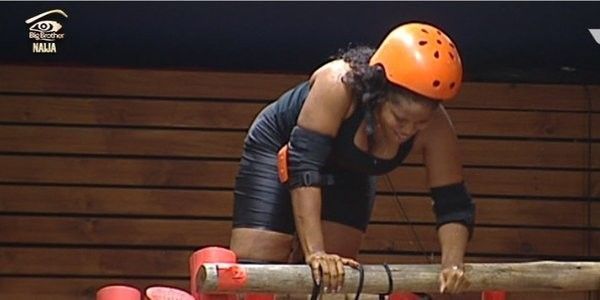 The fifth challenge was atest of strength and coordination where the Housemates had to push a wheel barrow from point A to point B. Once they reached point B, they mioved to the final stage of the game. For this sixth and last challenge, they had to use the cups provided to create the cup tower that was in front of them and to make it harder, the colours had to match.

It was clearly a difficult set of challenges as the pressure seemed to get to some of the Housemates with Efe, Jon, Ese, failing to complete the tasks in the allotted time before Gifty became the first Housemate to finsish the course to a round of aplause. Kemen motored through the course in a jaw-dropping under two minutes. Next up was Bisola who couldn't get past the first obstacle, which took her full alloted eight minutes. Uriel completed the course in a creditable 3 minutes and 16 seconds.

Like many of his Housemates, Bassey also struggled on the first obstacle, battling to rearrange the shapes into the correct shape and he eventually gave up before th etime ran out. Next up was TBoss who had an extra incentive to beat Kemen's time, as Kemen she had earlier said that she would "go upstairs with the winner." TBoss, in a hurry, thought she had solved th epuzzle and got stuck in the second obstacle before she was called back to the first obstacle by Biggie however, she soldiered through and managed to complete the course.

ThinTallTony was quickly given the go-ahead to proceed by Biggie's Ninja as he also sprinted his way through the course becoming the man to beat by with an incredible time of one minute and twenty two seconds. Debie-Rise also struggled and couldn't beat Uriel's time of three minutes and sixteen seconds, let alone the new time to beat, that of a lightning fast one minute and twenty two seconds. She gamely did her best and almost got to the end to the end "Debie-Rise, you couldn't rise above ThinTallTony's time" quipped Biggie to much laughter. It seemed as if most of the Housemates struggled the most on the first obstacle and Marvis was no different. Bally was the final contestant in the Arena and he was also quick through the course, using every bit of his athletic and mental prowess to challenge ThinTallTony's time, but in th eend, it was close but no cigar. 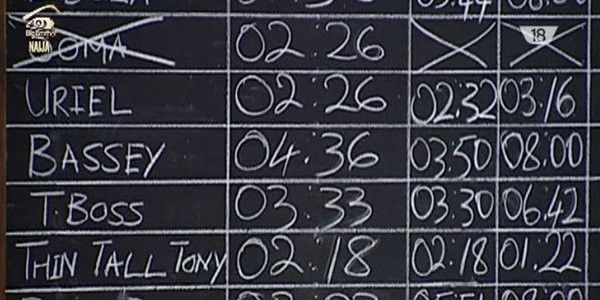 ThinTallTony was the winner and for his reward he was allowed to choose any lady and two males to share his treat. "Housemates, please stand up for the champion!" He was given twenty seconds and he chose TBoss, Kemen and Bally to share his hard won treat.

Video
Day 24: Fluttering across obstacles – BBNaija
Courtesy of Flutterwave, a Nigerian fintech company, both Level 1 and Level 2 Housemates competed in an obstacle relay game where team members played different roles to complete the obstacle course.
Video
Day 15: Week two in the Level Up House – BBNaija
Ships grew, strikes were issued, and the gist was shared. Week two in Biggie's House has not been without any entertainment as Housemates do all they can to stay in the House till the final day.
News
Day 41: Abeg’s obstacle course – BBNaija
It took luck, grit and a bit of strength to get through this Task. Here’s the run-down of the Friday Abeg Task.
News
Day 26: Getting progressive with Tecno – BBNaija
The Housemates will stop at nothing in tonight’s Task