Bally’s scheme of having a few bottles of alcohol hidden away from the rest of the Housemates certainly ruffled up a few feathers.

Bisola seemed the most irked by this and she went in, guns blazing and all for Bally and Efe, who seemingly knew more about the missing bottles of alcohol than they were willing to admit.

This all started when the Housemates discussed how some of the Housemates got more drinks than others. It quickly went from just a discussion to a full blown argument. “From now onwards, we be drinking water,” Bisola yelled.

Her argument seemed to be based on the fact that some Housemates got more drinks than others. "This is my first drink,” she said.

Bally’s decided to hide a few bottles of alcohol last night, after Biggie gave the Housemates a crate of Legend stout, as soon as they finished rehearsing their musical production. It was Biggie’s way of rewarding the Housemates for the hard work they had put in so far for this week’s Task.

Bally wasn’t the only culprit in on the plan to hide the alcohol, as Efe assisted him to hide the bottles under the kitchen table last night.

While Bisola and Bassy were arguing, ThinTallTony pitched in, adding that if Biggie gave them alcohol, it should have his name labelled on it.

The argument was ended by the sound of the buzzer, which prompted the Housemates to once again get into character for today’s “Catch The Egg” game. Biggie had the Housemates dressed in chicken and egg outfits and had the chickens chasing and catching the eggs, further sitting on them until they heard the buzzer again. 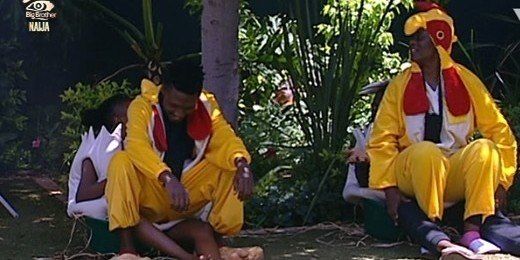 News
Day 8: One week down, 10 more to go – BBNaija
The first week of the Level Up Season has set the stage for an exciting season.
Video
Day 13: Deji tells Doyin whom he likes– BBNaija
Deji tells Doyin that he deliberately hasn't made a move on anyone in the house. He said that he advised Dotun to make a move on the girl that he likes because he feels like Dotun likes her more
Video
Day 78: Balancing Alcohol Intake
Frodd, Mike and Seyi talked about compromising in love. Ike went hard on the bottle with Tacha and Elozonam talking about their limit for alcohol.
Video
Day 66: Pere's secret alcohol stash – BBNaija
Pere returns to the House with a secret stash of alcohol and Whitemoney is surprised. It's about to be vibes in this House.