News
16 February 2017
Biggie lightened the general mood but then soon got the Housemates back to the grindstone working on their Wager.
Subscribe to Watch

The Housemates have had a roller-coaster week thus far and with Biggie getting the Fake Housemates to stir the collective pot last night, Biggie decided to lighten the mood a bit. There was lingering anger from TBoss and Debie-Rise as they were still in the dark as to who the culprits were who hid their guitar and perfume respectively. Biggie's two co-instigators were having the desired effect on the House with Jon setting first his eyes on TBoss and then Biggie gave himself and Ese a new Secret Task to disrupt any other romances developing in the House, a Task easier said thatn done.

Biggie got the Housemates to have fun with a cool chicken and egg Task which took the Housemates minds off the pressure-cooker that they had created for themselves with last weeks 75% wager loss which brought the Housemates closer together. ThinTallTony stood up to the plate with his group choreography for the Make Noise Task Presentation. With the Theme being "Make Money," will the Housemates succeed this week where they failed last week so miserably. 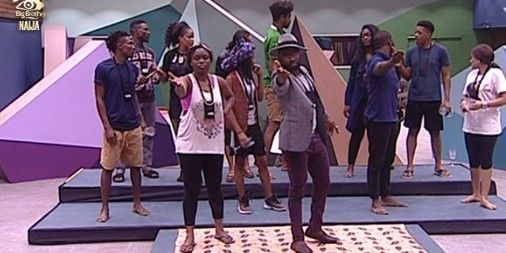 Before the Housemates were heard their first cockadoodledoo, Bisola, Gifty and some of the girls were arguing with Bally and the guys because they wanted more cold drinks in the House. The guys predictably wanted more alcohol. We are now on Day 25 of this fascinating Game and we Biggie have already had the Housemates running around and keeing them on their toes. Alcohol is a powerful tool in the House and with Biggie ramping up the pressure, with alcohol in teh House, anything can, and will happen. With the Game poised to get even better as the days go by, who will go home early and who has their eye set on the final prize? With three more Housemates facing possible Eviction this Saturday night in th eLive eviction show this Saturday night at 7pm WAT, the stakes couldn't be higer.

Don't forget that you have the power to Vote tonight in the Wager Task Presentation, go Vote on our Poll on the Big brother Naija official website.

Video
Day 11: A little flirt to make the day– BBNaija
Beauty and Groovy get into a flirtatious mood as they share a meal in the dining area
News
Day 17: Bryann and Ilebaye make peace – BBNaija
They ironed out their issues.
News
Live Show 2 - 25 July: The ladies make their debut – BBNaija
Big Brother Naija’s double launch weekend is officially wrapped up leading us to what promises to be a noteworthy season.
News
Day 25: Team Love wins the Storm Task – BBNaija
Bad energy stays far away from Team Storm.